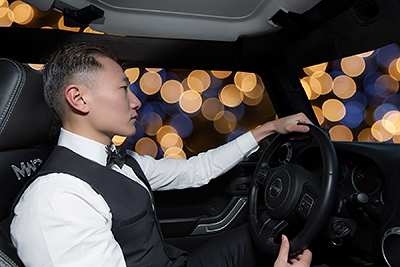 I went back to Savannah, Georgia, on a midnight red eye flight a few weeks ago during a cold snap in the South where there was ice on the street in the morning and the frost coated grass crunched under my feet. This never happened when I lived there 23 years ago. There was something that was the same though. The light. The magic light of the winter in a place tucked up river from the sea, filtered by two-hundred-year-old trees and the thick air...

I graduated with my MFA in photography from the Savannah College of Art and Design (SCAD) in the early 90s. This was Savannah pre-Forrest Gump and before the book, Midnight in the Garden of Good and Evil. This was a wilder place with inexpensive historic houses for us students to live in and create wonderful narrative pictures that were about a time and a place and ourselves within it.

This particular trip I was charged with being an alumni mentor at my alma mater. I didn't quite know what this would entail when I landed, but would soon find out as the chair of the photography department, Rebecca Nolan, took me to an exhibition of student photography in the Alexander Hall Gallery. The show, titled Persona was comprised of portraits, but it wasn't that straightforward. With more than 75 photographic works on view, Persona demonstrates the talent, personal vision and point of view that characterize these SCAD student photographers. The exhibition features inventive and expressive approaches to portraiture, including cyanotypes, camera obscura images, mixed media photo collage, multiple exposure photographs and artist's books, along with digital and color photography, video installation and black and white prints.

While the entire show was fantastic, there were a few artists that really caught my attention. Now, maybe there was something harkening back to my time in the South (quite a foreign place to someone raised in the North near Canada), but Bin Feng's work called to me. It could have been the scale (the photographs are quite large at 40x50) or it could have been the color (film noir meets the view camera in a perfect palette of drama and suspense) or it could have been the subject matter. I know what it was like to feel like a stranger in a strange land, but here was Bin Feng, born in Shanghai, China and studying in Georgia. He received his BFA from Shanghai Institute of Visual Art in 2012 and then the same year he immediately started the MFA program at SCAD while still trying to learn and master English as a spoken language. As the result of this language barrier, he felt he had become an outsider in the United States. However, he has used this overwhelming feeling to create photographs of his experience and is dedicated to make work that is about the cultural differences between his homeland and his new country. While being a photographer, he also makes video installations, sculptures and large-scale oil paintings. He also has some other talents. He is a cinematographer, a director and an actor...and a set designer and a prop master and a lighting technician. 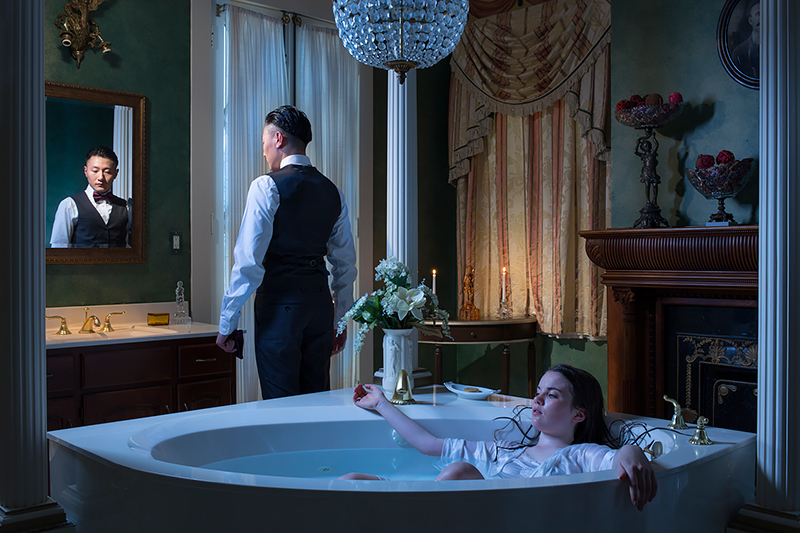 © Bin Feng - The American Dream: Ain't no trouble when she is gone 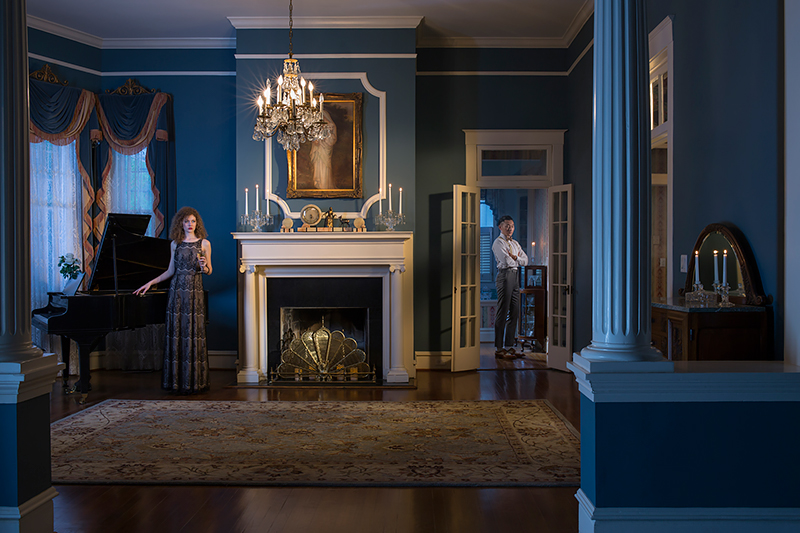 I recognized all of this upon viewing his self-portraits and speaking with him about his process. Bin Feng's photographic series explores the idea of The American Dream from an eastern male gaze. Iconic elements such as the white picket fence and the golden retriever dog are employed to reconstruct the spectacle. His project has progressed beyond these symbols though to convey whole stories and narratives about his experiences as a Chinese man in America. Being in the Southern United States and in the splendor of Savannah with its historical buildings and structures, Feng has sketched out and then re-enacted scenes of his own design using actors (always himself as the leading man) and lights, costumes, props and decorations of his choosing. When I asked him if he was interested in filmmaking, he seemed to think that creating these stills was enough work. And as you can discern from the final product, indeed, a lot has gone into these images. They are flawless and charged and make the viewer ask questions about who the male character is and what has happened in each of the vignettes. For they are like film stills, moments plucked from time, where something has happened...and also something else is about to unfold. To quote the artist, Concealed as the relations between classes, the true character is revealed, and a social necessity has been secured in constructing the new spectacle as such an illusive representation. By staging the moments of daily life, the artist performs as an actor and jumps between the fiction and reality, which essentially conveys the notion of the history of the man - the locomotive power behind the images, focusing on bicultural shock. And there is something shocking, and beautiful, about each of these scenes and the characters that perform in them. 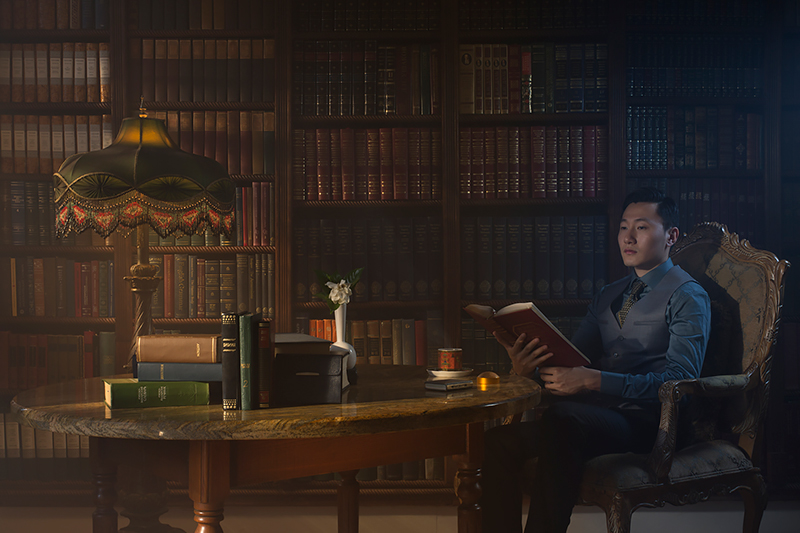 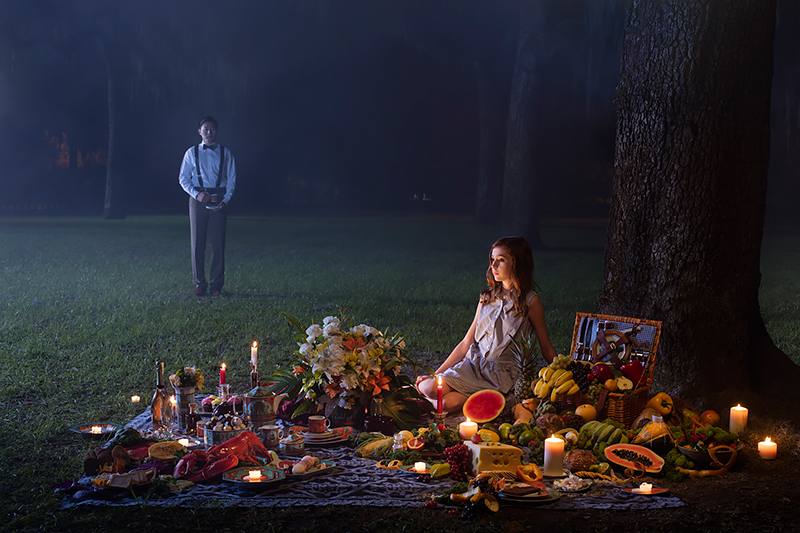 © Bin Feng - The American Dream: The absence of motherhood 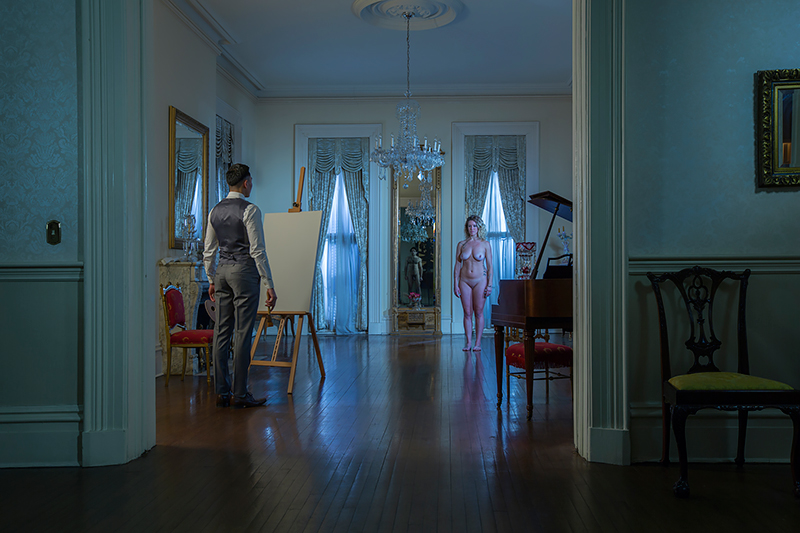 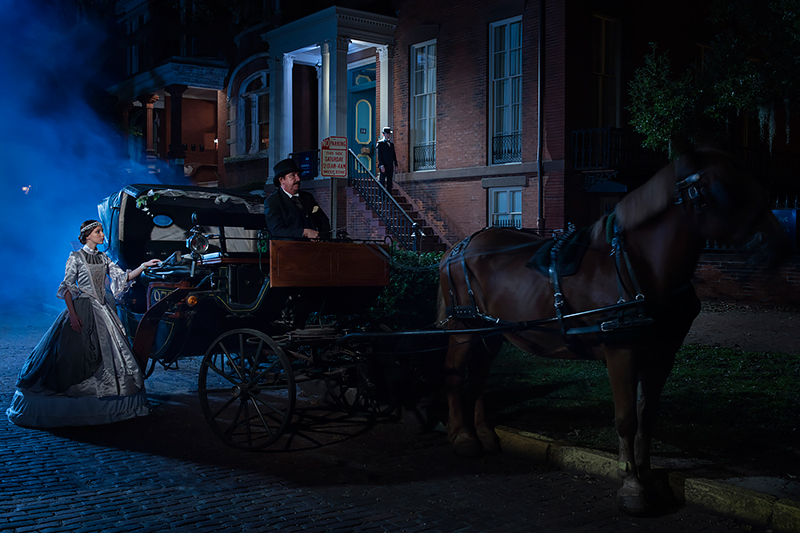 Another artist whose work drew my attention at once was Tajh Bergeron. Hanging in a grid near the entrance to the exhibition were 6 perfect 8x10 gelatin silver prints. I was staring at them and trying to figure out how they could be traditional prints and if the characters depicted in the scenes were real. Tajh Bergeron was born in New Orleans, Louisiana, and is about to graduate with his BFA in Photography. How could this work be made by an undergraduate student? That's what I kept asking myself when I viewed this project which is, honestly, like nothing I've ever seen before. Currently, Tajh is working with a large format view camera photographing virtual spaces with imaginary subjects (that are so convincing in their gestures and expressions that I thought they were real people). He is hoping to contribute some understanding to the value that video games can bring to the artistic community. To quote the artist, With intentions to spark imagination in the viewer, this series is depicting the exploration of a digital world with a large format photographer's approach. It is ultimately driven by an implied narrative created for the staged scenes. In the end, these images are seeking to help bridge the gap between the fine art principles taught by large format techniques and applying them in the grand worlds being built in today's open world video games.

I was so impressed by these pictures that I bought two.

These young photographers (Bin Feng was born in 1989 and Tajh Bergeron was born in 1992) are two to watch. They are both at the beginning of an amazing trajectory and I'm excited to see where they go next. It was inspiring to be back in Savannah and see the work that is coming out of both the undergraduate and graduate programs in photography. In my recent days there as an alumni mentor, I participated in a number of BFA and MFA classes and was pleasantly surprised at the strength of the student work and also their dedication to their craft and the pursuit of their art. Maybe it's that light, that casts a certain glow, that keeps these artists looking, looking, looking... 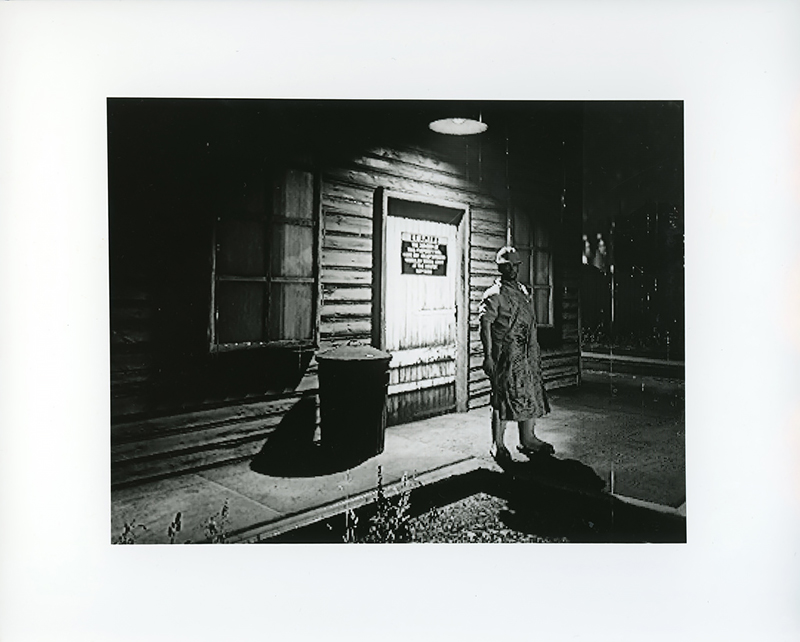 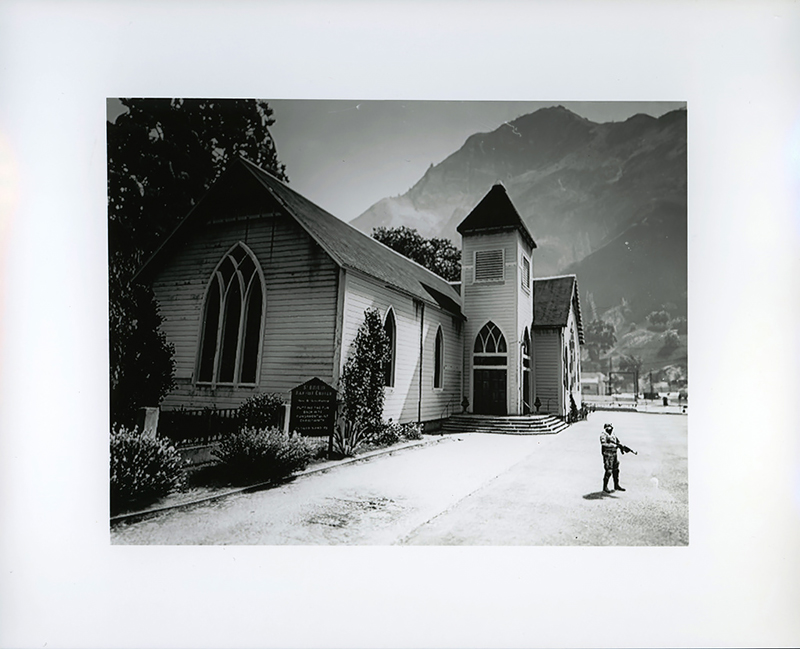 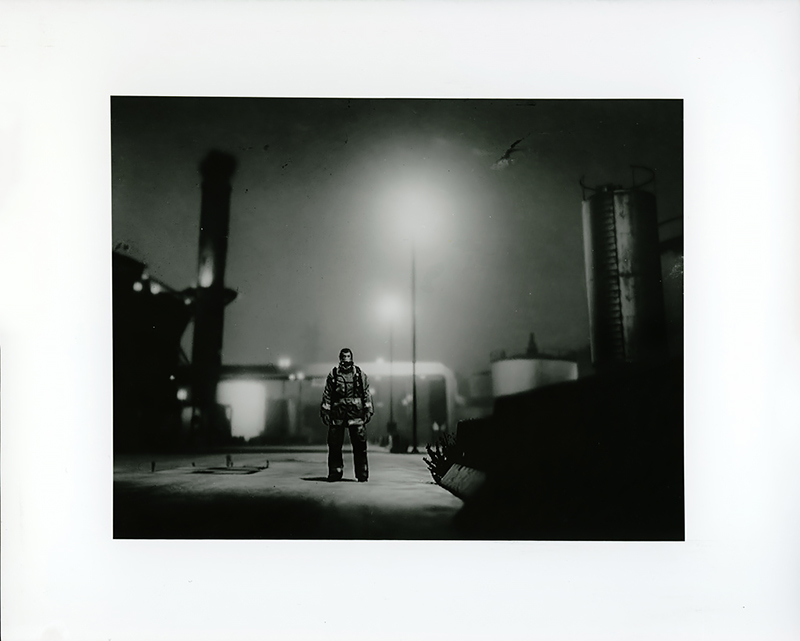 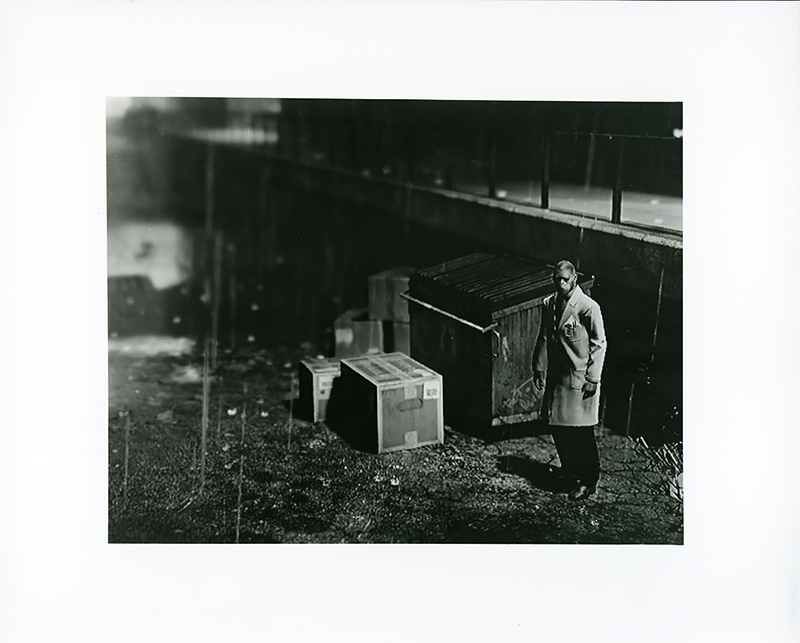 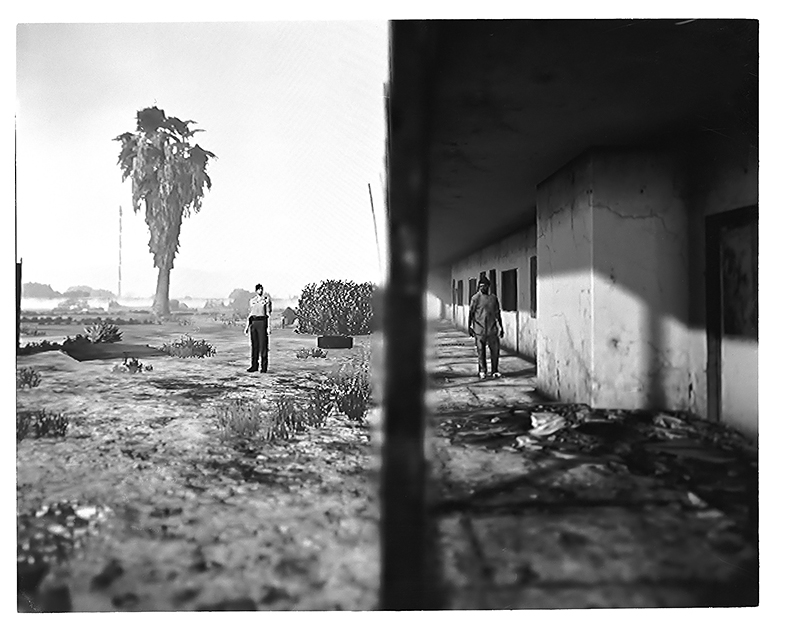 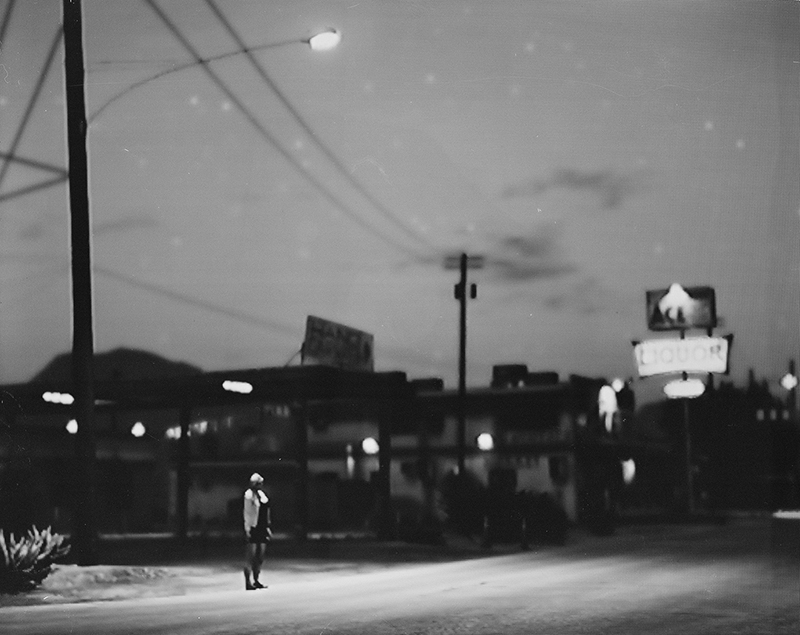