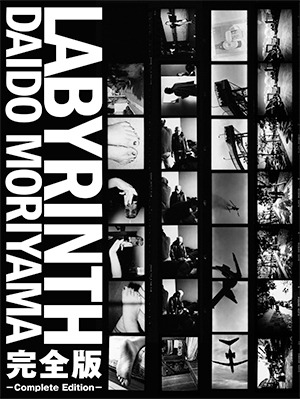 Plexus Co.,Ltd and euphonic,inc. is proudly announcing the release of the e-Book version of Daido Moriyama's LABYRINTH as LABYRINTH -Complete Edition- on iBookstore from June 3rd, 2015. Amazon Kindle version starts sale from July 6th. LABYRINTH -Complete Edition- reveals more than 3,000 shots of unseen photos, which was not print- ed on the original version of the book. The negative film of each page was precisely selected and aligned by Daido Moriyama himself and was printed as a Contact Sheet.

This e-Book version of LABYRINTH is not just a complete edition, but is a joy for your eyes through the entirely new way to view each shots one by one, by enlarging each image, by swipe and pinch in/out & flick. You are to explore Photographer Daido Moriyama's entire works from his early days to the 21st century.

Looking back the whole films forced Daido Moriyama to take a jour- ney to his own path as a Photographer. Each single Contact Sheet, reconstructed by himself, contains the essence of Daido's vision from the 1960's till now. Daido Moriyama named this book LABYRINTH by himself, reflecting the process of creation.

Browsing through each shot after another shot creates the illusion of a motion and rhythm. We can reach out to the photographer's heatbeat, soul and vision through this process. You will discover the alternative cut among the well known masterpiece and will notice how close you came accross the essence of Daido's instinct to release the shutter.

Plexus is proudly presenting LABYRINTH -Complete Edition- by re-scanning the entire 300 contact sheets with a High-Resolution scanner and calibrate each pages one by one to maximize the visual impact, and to reveal the essence of Daido Moriyama's original purpose.

LABYRINTH -Complete Edition- contains more than 3,000 previously unseen shots which were dropped out on the original book published in 2012 from Akio Nagasawa Publishing.

DAIDO MORIYAMA / Born 1938 in Osaka. After working as an assistant for photographers Takeji Iwamiya and Eikoh Hosoe, he went independent in 1964. He has been publishing his works in photography magazines among others, and received a New Artist Award from the Japan Photo Critics Association for Japan: A Photo Theater in 1967. Between 1968 and '70 he was involved in the photo fanzine Provoke, and his style of grainy, high-contrast images that came to be referred to asare, bure, boke(grainy, blurry, out-of-focus) made an impact on the realm of photography. Solo shows at New York' s Metropolitan Museum of Art and the Fondation Cartier pour l'Art Contemporain in Paris solidified Moriyama's worldwide reputation, and in 2012, he became the first Japanese to be awarded in the category of Lifetime Achievement at the 28th Annual Infinity Awards hosted by the International Center of Photography (ICP) in New York. TheWilliam Klein + Daido Moriyama exhibition together with William Klein at London's Tate Modern in 2012-13 was a showdown of two immensely popular photographers that took the world by storm.

Daido keeps going on enourmous amount of Street Snap under the motto.... There are no Quality without Quantity