Liu Zheng was born in 1969 in the Hebei Province, China. His signature graytone photographs have for years starkly framed, in political and provocative situations, his human subjects. When he works in colour, the tones are awash in sepia or a doctored saturation that comments on the nostalgic nature of his topics – his Peking Opera series in particular reflects this.

Liu’s background is not rooted in arts . After majoring in optical engineering at the Beijing Institute of Technology, he joined a local paper as a photojournalist, where he covered the coal mining industry. This laid the foundation for his interest in the lives of the countrymen that toil endlessly; one of his first series as an artistic practitioner explored the lives of ethnic minorities and our perception of them. He continues to eke out of the histories and stories of his subjects and topics in photography, and has published several volumes of his series.

Zheng's photos of China during the political and economic upheavals of the last decade are a combination of the over- familiar and the strange. Stylistically, they suggest an amalgam of August Sander, Diane Arbus, and Nan Goldin: Flash-lit, centered subjects and black-and-white prints; alluring yet uncomfortable intimacy; typologies of occupations and phyla of "freaks." But while Zheng's style is derivative, the world he uncovers is rich and varied. From the gruesome Waxwork in the Nanjing Massacre Memorial Museum, 2000, to Actors in a Film about the War Against the Japanese, 2000, to the hulking figure of A Poetess, Beijing, 1998, Zheng is both artist and documentarian. Perhaps the most apt comparison of all is to Robert Frank, who, like Zheng, set out to capture the complexities of a vast and heterogeneous nation. 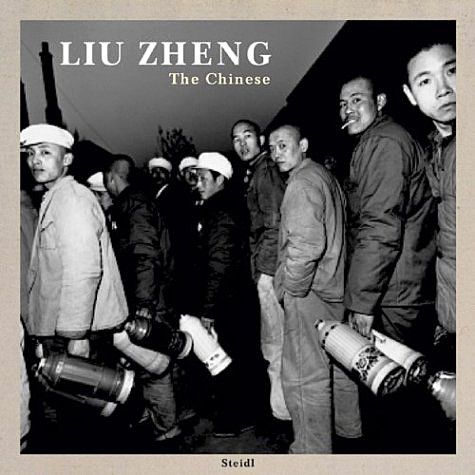 Liu Zheng: The Chinese
Author: Liu Zheng, Christopher Phillips and Gu Zheng
Publisher: Steidl
Year: 2008 - Pages: 176
In 1994, Chinese artist Liu Zheng conceived of an ambitious photographic project called The Chinese, which occupied him for seven years and carried him throughout China. Inspired by the examples of August Sander and Diane Arbus, he has captured a people and country in a unique time of great flux, providing a startling vision of the deep-rooted historical forces and cultural attitudes that continue to shape China and its people. Liu seeks out moments in which archetypal Chinese characters are encountered in extreme and unexpected situations. His photographs are divided among a number of topics which betray a dark vision, albeit one that is laced with mordant humor. His main subjects to date have included street eccentrics, homeless children, transvestite performers, provincial drug traffickers, coal miners, Buddhist monks, prison inmates, Taoist priests, waxwork figures in historical museums, and the dead and dying. This is the first monograph of his work to appear outside of China and accompanies Between Past and Future: New Photography and Video from China, a major exhibition at the International Center of Photography, New York.

Denis Dailleux
Nationality: France
Born: 1958
Denis Dailleux, (b. 1958, Angers) lives in Paris when he is not in India, Egypt or Ghana. Reprensed by Agency Vu', Camera Obscura Gallery (Paris), Galerie 127 (Marrakech) and Galerie Peter Sellem (Francfort), his work has been exhibited and distinguished worldwide.

Rémi Chapeaublanc
Nationality: France
Born: 1984
Self-taught photographer, Rémi Chapeaublanc was destined for a scientific career in bioinformatics. He continued to use the Cartesian approach from this training adding a sensitive, people-centred dimension the day he decided to be a photographer.

For his series Gods & Beasts (2011), he crossed Europe and Asia reaching Mongolia. Inside the yurt or outside, at nightfall, he produced portraits of Kazakh nomadic herders and their animals without ever resorting to (…)
All About Rémi Chapeaublanc

Zhang Xiao
Nationality: China
Born: 1981
Zhang Xiao, 1981, China, studied Architecture at Yantai University. Between 2005 and 2009 he worked for the Chongqing Morning Post and has since been active as a freelance photographer. His project Coastline focuses, as the title describes, on the Chinese coastline which is 18000 kilometres long. For Xiao the sea is a place of strong emotions and rich imagery. He states that "the sea is the beginning of lives and dreams." The project also clearly shows how China (…)
All About Zhang Xiao

Maia Flore
Nationality: France
Born: 1988
Maia Flore was born in 1988, in France. She is currently living in Paris.

Graduated from Ecole des Gobelins in 2010, she joined Agence VU' in 2011. Her approach fits into a research of coincidences between reality and her imagination. Her world is a complete fabrication in form of touching and enchanting narrations, even surrealistic.

This is in Sweden she begins her first series "Sleep Elevations", a journey that indulges in childhood memories. (…)
All About Maia Flore

Kerry Mansfield
Nationality: United States
Kerry Mansfield is a San Francisco based photographer whose work explores time and how it affects our perceptions of what we see and the world it envelops. Born in New Jersey in 1974, Kerry graduated with a Bachelor’s Degree in Photography from UC Berkeley and did further studies at CCA (California College of the Arts). Her work has been exhibited globally and garnered numerous honors including LensCulture’s Single Image Award, multiple PX3, World Photography Organization (…)
All About Kerry Mansfield

August Sander
Nationality: Germany
Born: 1876 - Died: 1964
August Sander (17 November 1876 – 20 April 1964) was a German portrait and documentary photographer. Sander's first book Face of our Time (German: Antlitz der Zeit) was published in 1929. Sander has been described as "the most important German portrait photographer of the early twentieth century." Sander was born in Herdorf, the son of a carpenter working in the mining industry. While working at a local mine, Sander first learned about photography by assisting a (…)
All About August Sander

Mario Giacomelli
Nationality: Italy
Born: 1926 - Died: 2000
Giacomelli was a self-taught photographer. At 13, he left high school, began working as a typesetter and spent his weekends painting. After the horrors of World War II, he turned to the more immediate medium of photography. He wandered the streets and fields of post-war Italy, inspired by the gritty Neo-Realist films of Vittorio De Sica and Roberto Rossellini, and influenced by the renewed Italian photographer Giuseppe Cavalli, and developed a style characterized by (…)
All About Mario Giacomelli