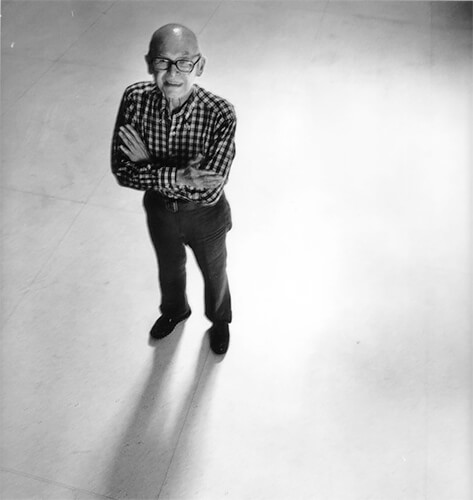 © Photographer Max Yavno at the G. Ray Hawkins Gallery, West Hollywood, 1980s. Photo by Chris Gulker
Country: United States | Born: 1911 - Died: 1985
Max Yavno (1911–1985) was a photographer who specialized in street scenes, especially in Los Angeles and San Francisco, California. The son of Russian immigrants, Yavno was born in New York on April 26, 1911. He had one sister. He was married at age 19 and divorced three years later. He died in April 1985 of complications resulting from a fall in a shower. Yavno worked as a Wall Street messenger while attending City College of New York at night. He attended the graduate school of political economics at Columbia University and worked in the Stock Exchange before becoming a social worker in 1935. He did photography for the Works Progress Administration from 1936 to 1942. He was president of the Photo League in 1938 and 1939. Yavno was in the U.S. Air Force from 1942 to 1945, after which he moved to San Francisco and began specializing in urban-landscape photography. History professor Constance B. Schulz said of him: For financial reasons he worked as a commercial advertising photographer for the next twenty years (1954–75), creating finely crafted still lifes that appeared in Vogue and Harper's Bazaar. He returned to artistic landscape photography in the 1970s, when his introspective approach found a more appreciative audience. Funding from the National Endowment for the Arts enabled him to travel to Egypt and Israel in 1979. He also captured a pre-Dodgers Chavez Ravine, a giant plaster leg on top of a building in in West Los Angeles and a "nostalgic" shot of a cable car being turned around at Powell and Market streets in San Francisco. His noted photograph of a crowd watching "sun-worshipping body builders at Muscle Beach in Venice" sold at auction in 1984 for almost $4,000. He said he had spent three Sundays at the beach before the subjects "stopped flexing for his camera and resumed posing for each other." His obituary in the Los Angeles Times said that: Melrose Avenue photo gallery owner G. Ray Hawkins, who represented Yavno and exhibited his works, called him a "social documentarian" and noted that he had "a very special ability for combining composition and content while capturing his social vignettes." Photographer Edward Steichen selected twenty of Yavno's prints for the permanent collection at New York's Museum of Modern Art in 1950, and the next year Yavno won a Guggenheim fellowship.
Source Wikipedia
Gallery:
Scott Nichols Gallery
Share:
Selected Book: 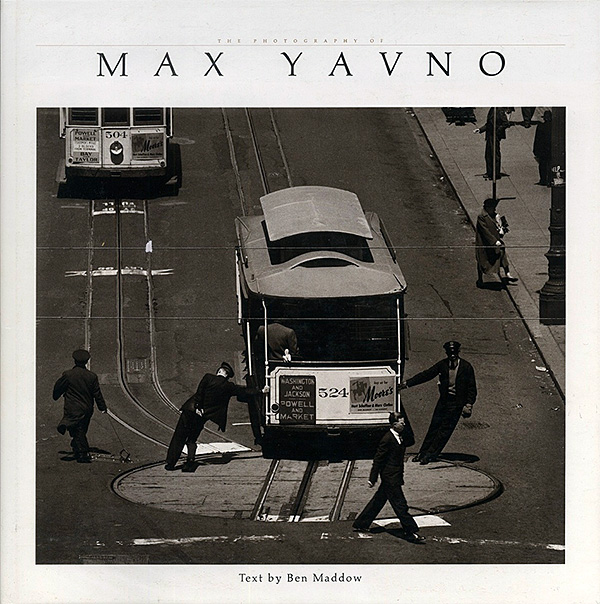 Diane Arbus
Nationality: United States
Born: 1923 - Died: 1971
Diane Arbus (March 14, 1923 – July 26, 1971) was an American photographer and writer noted for black-and-white square photographs of "deviant and marginal people (dwarfs, giants, transgender people, nudists, circus performers) or of people whose normality seems ugly or surreal.". Arbus believed that a camera could be “a little bit cold, a little bit harsh” but its scrutiny revealed the truth; the difference between what people wanted others to see and what they really (…)
All About Diane Arbus

Romain Jacquet-Lagrčze
Nationality: France
Born: 1987
Romain Jacquet-Lagrčze is a French photographer based in Hong Kong where he is shooting most of his projects. In 2011 he started working on his first series "Vertical Horizon"” focused on the unmatched vertical growth of Hong Kong. This series has firstly been published as a coffee table book in 2012 with the local publisher Asia One. For the last 4 years, Romain has kept working on the series and adding new photos to it.

Ken Hermann
Nationality: Denmark
Based in Copenhagen, Ken Hermann possesses a natural urge to explore photography and world alike. He has traveled extensively, from secluded regions of India and Ethiopia to modern metropolises like New York. From every location, no matter how small or large, Hermann draws energy and inspiration; exploration of people, culture, and life is a central facet to his work, which is full of texture, volume, and atmosphere. From these experiences, he applies a cosmpolitan aesthetic (…)
All About Ken Hermann

Martin Munkácsi
Nationality: Hungary
Born: 1896 - Died: 1963
Martin Munkácsi (born Mermelstein Márton; Kolozsvár, Hungary, May 18, 1896; died July 13, 1963, New York, NY) was a Hungarian photographer who worked in Germany (1928–34) and the United States, where he was based in New York City.
Munkácsi was a newspaper writer and photographer in Hungary, specializing in sports. At the time, sports action photography could only be done in bright light outdoors. Munkácsi's innovation was to make sports photographs as (…)
All About Martin Munkácsi

Martin Bogren
Nationality: Sweden
Born: 1967
Martin Bogren was born 1967 in Sweden and is now based in Malmo. His photographic practice has developed by a personal documentary tradition in the early 90’s – photographing bands and artists. His first book The Cardigans_- Been It was published in 96 after several years touring with the band.

Swedish born Martin Bogren first came to attention in 1996 with his book on the Swedish band, The Cardigans, who he photographed over several years while touring (…)
All About Martin Bogren

Misha Maslennikov
Nationality: Russia
Born: 1964
Misha Maslennikov was born in 1964 in the settlement of Dobroe close to Moscow, Russia. Since 2013 constantly lives in the city of Odessa, Ukraine. He began traveling in the Russian North in 2002. The main areas are single expeditions to the places difficult of access, visiting and co-operation with cenobites of active monasteries, sketes, with keepers of ancient temples, pogosts, studying the way of life of modern hermits, anchorites, real intercourse and contacts with (…)
All About Misha Maslennikov

Jorge Pozuelo
Nationality: Spain
Born: 1977
Born in León in 1977, he began his photographic career in the 90s. He quit his job as a telecommunications technician to devote himself to photography where he did an MA in photography from the University of Canterbury. He always wanted to find the human side in all his photographs, playing with visual aggression and silence of space. In 2009 he took an year off and traveled the world and published “Picture Easy”, a book for all rules of photography, affordable for anyone to (…)
All About Jorge Pozuelo

Attar Abbas
Nationality: Iran/France
Born: 1944 - Died: 2018
Abbas Attar, better known by his mononym Abbas, was an Iranian photographer known for his photojournalism in Biafra, Vietnam and South Africa in the 1970s, and for his extensive essays on religions in later years. He was a member of Sipa Press from 1971 to 1973, a member of Gamma from 1974 to 1980, and joined Magnum Photos in 1981.

Attar, an Iranian transplanted to Paris, dedicated his photographic work to the political and social coverage of the developing (…)
All About Attar Abbas