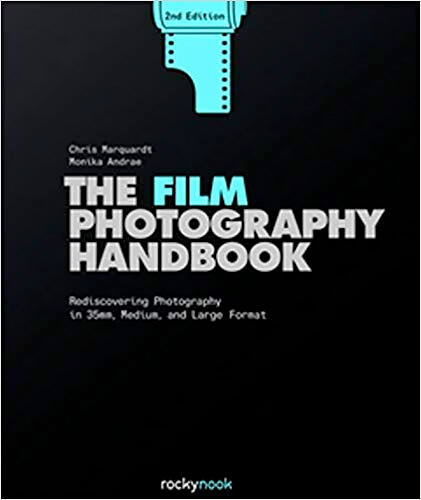 The Film Photography Handbook
By Chris Marquardt, Monika Andrae
Publisher : Rocky Nook
2019 | 296 pages
In recent years, film photography has witnessed a significant renaissance-and not just among those who have previously shot with film. Interest in film photography and analog photography has also grown enormously among those who only have experience shooting digitally. In The Film Photography Handbook, 2nd Edition, authors Chris Marquardt and Monika Andrae speak to both types of film photographers as they offer an easy-to-understand, complete resource to shooting film. In this updated and expanded edition, they address today's working climate, including such topics as the hybrid film/digital workflow, the digitization of negatives, and using smartphones for light metering and to assist in film processing.
This book is intended for anyone who is curious about film and analog photography, whether you need a refresher course or are discovering this wonderful format for the first time. You'll learn how easy it is to shoot and process black-and-white film at home, and that just a little special equipment is needed to get into film photography. 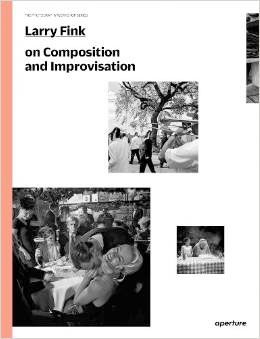 Larry Fink on Composition and Improvisation
By Larry Fink
Publisher : Aperture
2014 | 128 pages
In this series, Aperture Foundation works with the world's top photographers to distill their creative approaches, teachings, and insights on photography--offering the workshop experience in a book. Its goal is to inspire photographers of all levels who wish to improve their work, as well as readers interested in deepening their understanding of the art of photography. Each volume is introduced by a well-known student of the featured photographer. In this book, Larry Fink--well-known for his layered pictures in social settings--explores composing photographs and improvising within a scene to create images with both feeling and meaning. Through words and photographs, he reveals insight into his own practice and discusses a wide range of creative issues, from connecting with the subject in front of the lens to shaping a vision that is authentic. Photographer Lisa Kereszi, a student of Larry Fink, provides the introduction.

All About Larry Fink 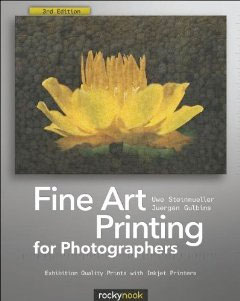 Fine Art Printing for Photographers: Exhibition Quality Prints with Inkjet Printers
By Uwe Steinmueller, Juergen Gulbins
Publisher : Rocky Nook
2013 | 300 pages
Today's digital cameras continue to produce increasingly higher definition image data files, making high resolution, large-format output possible. As printing technology moves forward at an equally fast pace, the new inkjet printers are capable of printing with great precision at a very fine resolution, providing an amazing tonal range and significantly superior image permanence at a more affordable price. In the hands of knowledgeable photographers, these printers are able to produce prints that are comparable to the highest quality darkroom prints on fine art paper.
The third edition of this best-selling book provides the necessary foundation for successful fine art printing: the understanding of color management, profiling, paper, and inks. It offers advice on selecting an appropriate printer for long-lasting fine art prints, demonstrates how to set up the printing workflow and select a suitable paper for your subject, and guides you step-by-step through the process of converting an image file to an outstanding fine art print.
This new edition covers the most recent lines of high-end inkjet printers, photo papers, and devices for monitor and printer profiling. It also addresses the printing dialogs and some new features of Photoshop CS6. 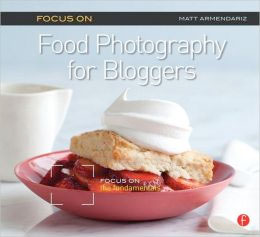 Focus On Food Photography for Bloggers
By Matt Armendariz
Publisher : Focal Press
2012 | 208 pages
Sharing your kitchen concoctions on your personal food blog has never been as popular as it is right now, but if you've ever had trouble getting your tasty temptations to look like pretty plates on camera, you know how difficult it can be to take amazing pictures of food. Matt Armendariz, of Mattbites food blog fame, shares his experiences and best practices for creating wonderful food photos in Focus On Food Photography for Bloggers. Written specifically for you the blogger, Matt discusses the ins and outs of equipment, lighting, composition, propping, sparking your inspiration, and getting creative, all with what you have on hand at home! Learn how to avoid common pitfalls with foods that are notoriously camera shy, how to successfully snap your dinner at a restaurant as well as on your kitchen table, and how to style your food with what you have in your cupboards. He also includes advice on post-processing, posting, and protecting your prized images. 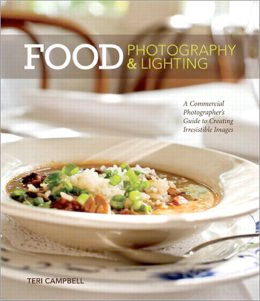 Food Photography & Lighting
By Teri Campbell
Publisher : New Riders
2012 | 288 pages
reating mouth-watering food images requires more than just a love of food and access to a kitchen. With the popularity of food blogs and photography how-tos, it’s tempting to think that anyone can photograph food, but it’s another thing entirely to shoot for a tight ad layout with the pressure of your client watching over your shoulder. Commercial food photographer Teri Campbell has been called a “lighting master,” and in this beautifully illustrated book, he not only shares his detailed lighting set-ups and shooting techniques for a wide range of food and drink shots, but also offers candid advice on how to set up a studio, use the right equipment, market your work, find clients, bid on assignments, hire food and prop stylists, and communicate effectively with everyone on the set. 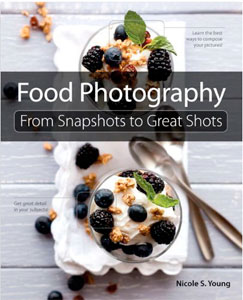 Food Photography: From Snapshots to Great Shots
By Nicole S. Young
Publisher : Peachpit Press
2011 | 288 pages
Are you a “foodie” looking to take eye-catching photos of your culinary concoctions? Do you have a food blog that you’d like to enhance with better visuals? Do you want to create photos that conjure up the flavors of your favorite foods but lack the photographic technique to make it happen? Then this book is for you! In Food Photography: From Snapshots to Great Shots, photographer Nicole Young dishes up the basics on getting the right camera equipment–lights, lenses, reflectors, etc.–and takes you through the key photographic principles of aperture, ISO, and shutter speed. She then discusses lighting and composition and shows how to style food using props, fabrics, and tabletops. Finally, she explains how to improve your photos through sharpening, color enhancement, and other editing techniques. Beautifully illustrated with large, vibrant photos, this book offers the practical advice and expert shooting tips you need to get the food images you want every time you pick up your camera. 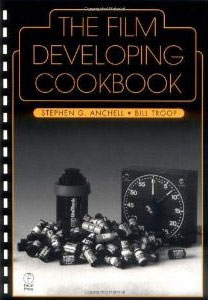 Publication
Event
Toni Meneguzzo: Diptych
29 ARTS IN PROGRESS gallery is proud to announce the opening on the 20th of September 2022 of DIPTYCH - the solo show of the eclectic Italian photographer Toni Meneguzzo. The artist pushes towards a truly contemporary language suggestive of an unpublished relationship between the Polaroid and the vividness of his most recent digital photographs which combine a rigorous formal technique with an uninhibited use of the medium. The exhibition will run from 20th of September to the 19th of November 2022.
Read More

Publication
Event
The Day May Break Chapter Two by Nick Brandt
The Day May Break is an ongoing global series portraying people and animals that have been badly impacted by environmental degradation and destruction. Chapter One, which was released last year, features photographs taken in Zimbabwe and Kenya in late 2020. The work in Chapter Two, which will be unveiled in October 2022, was taken by Brandt earlier this year in Bolivia. This is the first time in his 20 year career that Brandt has made work outside of Africa.
Read More

Publication
MEADOW by Nicholas Pollack
Secaucus, New Jersey is partially surrounded by the marshes, inlets, and wetlands known as the Meadowlands. The ecosystems have been severely impacted by years of landfills and other environmental abuses, but it is what is found and what remains in this region that photographer Nicholas Pollack works to convey in his photographic project and book Meadow (Hirmer, October 2022).
Read More

Publication
Berlin by Jason Langer
For part of his childhood, photographer Jason Langer lived with his mother and two brothers on a kibbutz in Israel following his parent’s divorce in the United States. This experience, along with childhood visits to the kibbutz’s Holocaust memorial every Yom Hashoah, and hearing frightful stories from his mother and grandmother about German people, shaped and informed his impressions and understanding of Germany. This included considerations and beliefs of Germany as a country, culture, its past Nazi ideology, and how that related to his own Jewish identity. It was a complicated understanding, and one that haunted him in several respects throughout his life.
Read More

Publication
Ritual by David Katzenstein
These photographs by David Katzenstein emerged from his lifelong artistic journey as a visual chronicler of humanity. His mission led him to travel to many parts of the world to experience other cultures and peoples firsthand, capturing images that relate to the themes he is drawn to. In the process, he came to be fascinated by rituals.
Read More

Publication
Event
VIVANT, Le sacre du corps by Isabelle Chapuis
A work to which she has dedicated herself for the last 7 years. ''I propose through this work an experience of meeting the living. In its human, vegetal, mineral or animal forms, I am keen to celebrate its manifestations in their rich and complex beauties.
Read More

Publication
Roadside Meditations by Rob Hammer
Photographer Rob Hammer logs in an average of 35,000 miles per year road-tripping around the United States in his truck with his dog, exploring, discovering, and photographing what he's said can be "an endless expanse of unknown." He's come to call the trips "treasure hunts," and the 75 color images collected in his new book, Roadside Meditations (Kehrer Verlag, October 4, 2022) reflect a sense of respect and wonder not only for the landscapes and human imprint he discovers along the way, but also for the immersive process itself.
Read More

Publication
Paddy Summerfield: Mother and Father
Mother and Father is a moving journal of the final years of a sixty-year marriage. For ten years, from 1997 to 2007 Paddy Summerfield photographed his parents, reflecting on the bond between them, which even the effects of Alzheimers could not break. They become symbols in a drama of balance and tension, which is both domestic and epic.
Read More
Advertisement