What Is The Minnesota Street Project 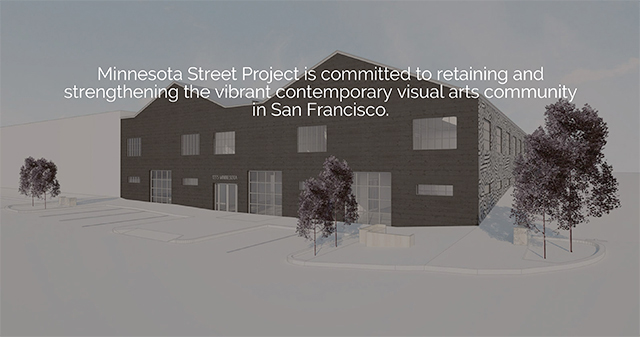 Keeping art alive in San Francisco takes a different economic model, one that will disrupt the sound of closing galleries due to escalating rents.

With real estate costs continuing to skyrocket, Minnesota Street Project offers not only affordable space for art galleries, artists and related nonprofits and retail, but it also provides a location in the heart of the historic Dogpatch district to put down roots and build a dynamic arts hub.
Our long-term mission is to create a local, national, and international cultural destination in San Francisco with an eclectic mix of contemporary art exhibitions and compelling live performances, talks by artists and other creative people, and more, says Deborah Rappaport, co-founder of Minnesota Street Project and long-time patron of the arts. To retain and strengthen San Francisco's vibrant visual arts community, we believe the best approach is to create a new self-sustaining business model for supporting the arts.

With no rent control for business space in San Francisco, one of the biggest issues for arts organizations and nonprofits is not only finding affordable space, but also securing a long-term lease with maximum rent increases outlined in advance.

Minnesota Street Project provides space that is far below market rate and offers predictability for our tenants, says Andy Rappaport, co-founder of Minnesota Street Project. We've structured the tenant leases to start at effective costs that are half to a third of the current market rate with annual caps on increases. We are committed to long-term stability for our tenants. We can offer these rents and capped increases even in such a hot real estate market because our financial objectives for the project are to break even over the long term and measure our return-on-investment in terms of civic contribution rather than financial gain.

Founders of Minnesota Street Project also want it to serve as a demonstration project for what is possible. New York, London and other metropolitan areas around the world are facing similar issues around rising commercial real estate and need solutions to keep artists and gallery owners from leaving their cities or going out of business.

While 1275 Minnesota Street is under construction, the project will begin programing at temporary spaces in Dogpatch and around the city.
Jensen Architects, whose work includes Presidio Parklands, SFMOMA Rooftop Gardens and SHED Store and Café, designed the space for permanent galleries with a large, open atrium, and galleries for temporary installations, live performances, special events and visiting artists.

The wait for permanent space to house commercial galleries is not stopping Minnesota Street Project from presenting rotating visual exhibits highlighting local artists. While 1275 Minnesota Street is under construction and slated to open March 2016, Minnesota Street Project will hold events at its temporary headquarters at 2291 3rd Street in the city's historic Dogpatch neighborhood. Its inaugural project, Ajit Chauhan's Concrete is Not Always Hard, will open with a reception on Friday, June 5, 2015, 6 pm - 9 pm. The show will run through July 11.

Concrete Is Not Always Hard is an exhibition of recent works on paper by San Francisco-based artist Ajit Chauhan. At the opening reception, several of the Bay Area's most distinguished poets will read from their works.

The exhibition takes its name from A. Barbara Pilon's seminal 1972 book on concrete poetry, in which she asks, Have you ever thought of writing a poem using only a letter, a word, distortions of words, nonsense words, or no words at all? Have you ever thought of using the space around words to help the reader understand the idea you are trying to communicate?

Taking these questions as a cue, Chauhan uses a typewriter to investigate the visual or plastic potential of language. Chauhan's typewriter drawings use the repetition of single letters to form a sequence of fields. His interest in elementary gestures, led him to work within language in plastic terms, starting from its distinct units.

In the words of Gilles Deleuze and Felix Guattari Writing has nothing to do with signifying. It has to do with surveying, mapping...

Chauhan has exhibited his work at the Saatchi Gallery in London, the UC Davis Museum, the Grimm Museum in Berlin, White Columns NY, the SONS Museum in Kruishoutem, Belgium, the Berkeley Art Museum, the DeYoung Museum, The Asian Art Museum, the Jack Hanley Gallery, New York & San Francisco, Annarumma Gallery in Naples, Italy, SVIT in Prague, Czech Republic, the Apartment in Vancouver, BC and others.

At 7 pm, the opening reception will include poetry readings by acclaimed poets: Norma Cole, Frances Richard, Cedar Sigo and Kevin Killian read from their poetry.

Norma Cole is the author of Win These Posters and Other Unrelated Prizes Inside, Where Shadows Will: Selected Poems 1988-2008, Spinoza in Her Youth, and Natural Light. Actualities, her collaboration with the painter Marina Adams, is due to be published by Litmus Press in September 2015.

Frances Richard is the author of Anarch (Futurepoem, 2012), The Phonemes (Les Figues Press, 2012), and See Through (Four Way Books, 2003). She writes frequently about contemporary art, and is co-author, with Jeffrey Kastner and Sina Najafi, of Odd Lots: Revisiting Gordon Matta-Clark's Fake Estates (Cabinet Books, 2005). She teaches at the California College of the Arts in San Francisco.

Kevin Killian is a poet, playwright, novelist, and art writer living in San Francisco. His many books include Tweaky Village and Pink Narcissus Poems. Killian's upcoming projects include a play, New Light on Riboflavin, for Berkeley Museum Matrix show, in conjunction with Will Brown; a new book of stories; an anthology, The Nightboat Book of New Narrative Writing 1977-1997, edited with Dodie Bellamy; and Tagged Part 2, a new collection of Killian's intimate photographs of poets, artists, musicians, filmmakers, curators, and other denizens of the art world.

Cedar Sigo was raised on the Suquamish Reservation in the Pacific Northwest and studied at The Jack Kerouac School of Disembodied Poetics at the Naropa Institute. He is the author of eight books and pamphlets of poetry, including Language Arts (Wave Books, 2014), Stranger in Town (City Lights, 2010), and Expensive Magic (House Press, 2008), and two editions of Selected Writings (Ugly Duckling Presse, 2003 and 2005). He was recently a visiting writer at St. Mary's College. He lives in San Francisco.