Lottie Davies - Quinn: Until the Land Runs Out 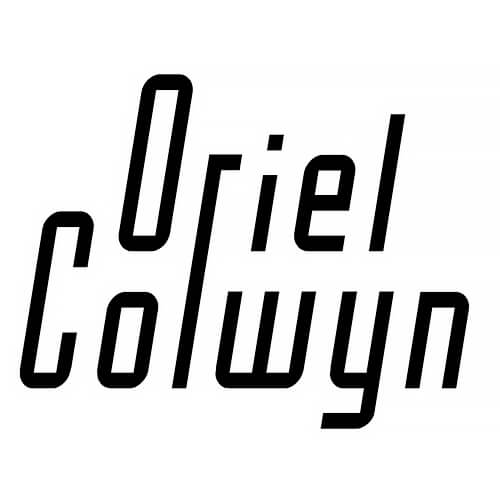 For this installation of Quinn presented at Oriel Colwyn, North Wales (22 January - 10 April 2021), British photographer, artist, and writer, Lottie Davies, who herself possesses strong familial ties to North Wales, has created a large-scale multimedia project that extends far beyond the gallery walls into the seaside town and community of Colwyn Bay itself. Using a variety of media and installations, Quinn: Until the Land Runs Out is a meditation on grief, loss, loneliness, the human search for meaning, and the possibility of redemption through time and landscape. It recounts the eponymous fictional story of a young man, William Henry Quinn, who embarks on an epic and symbolic walk from south-westEngland to the far north of Scotland, taking in the length of Wales in between, in post-Second World War Britain.

The exhibition at Oriel Colwyn, the third in an ongoing tour across the UK with distinct installations devised specifically for each venue, presents a multi-dimensional view of the titular figure and his story by using moving image works and large format photographs, ‘personal' ephemera, text, and installations. Created to be viewed and read side-by-side, it is much like simultaneously reading a novel, visiting the theatre, and going to the cinema. The viewer can use these visual clues as a way of untangling as much or as little of the narrative as they desire. The exhibition continues similarly outside in Colwyn Bay itself, presenting vinyls and moving image within empty shop spaces and other easily accessible public spaces so that Quinn can be experienced beyond the physical and opening time constraints of Oriel Colwyn. 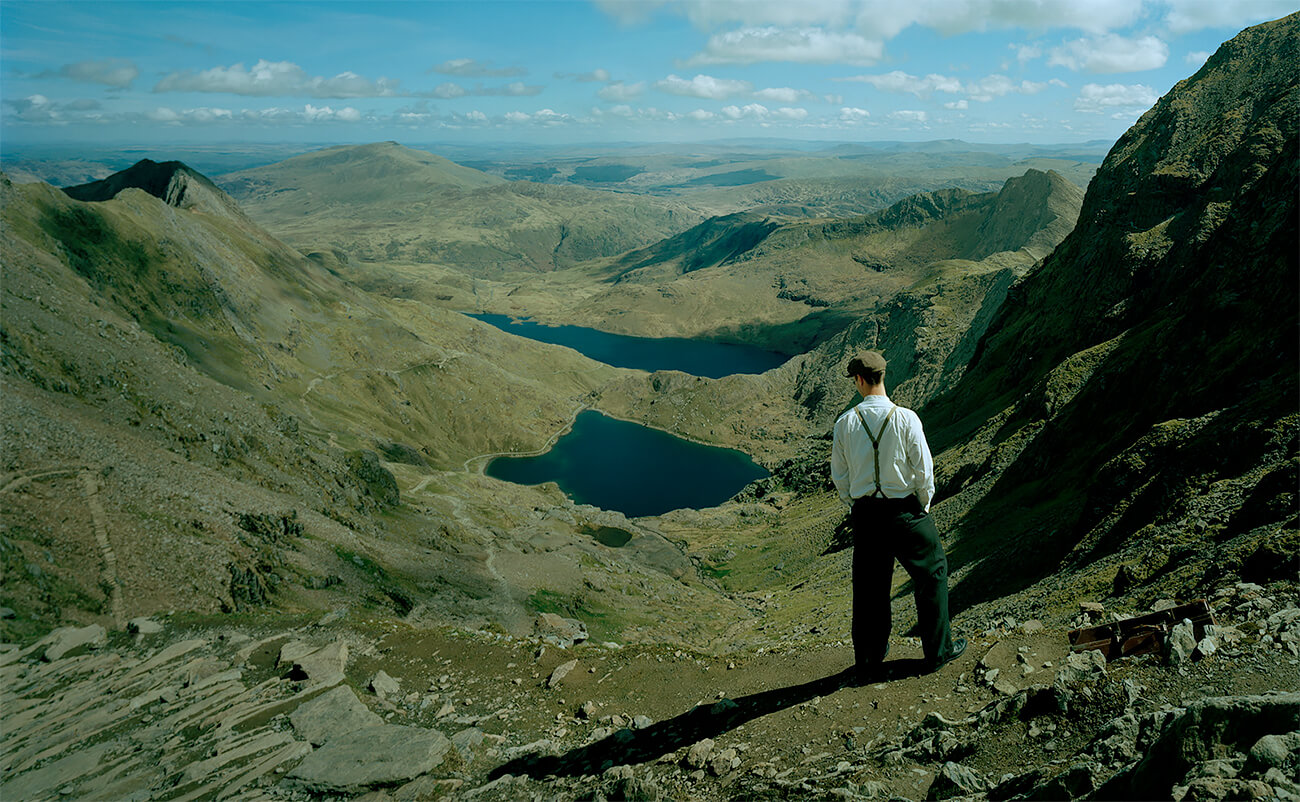 North Wales is of particular personal importance to Davies as her paternal family has strong connections there - specifically to the nearby Llŷn Peninsula and Snowdonia. In the late 19th century they were involved in establishing the Ffestiniog and Snowdon railways; one of the current working engines at the Snowdon Mountain Railway is named ‘Ninian' after Davies' great uncle. Immensely proud of her Welsh heritage, Davies has the fictitious Quinn walk almost the entire length of the country during his journey: through the abandoned slate-mining village of Cwmorthin, near Blaenau Ffestiniog; and to Betws-y- Coed (to where Davies' own father was evacuated from London during WWII) with Quinn depicted crossing the Sappers' Suspension Bridge over the River Conwy on the edge of the village, en route from Cwmorthin to Eryri (known as Snowdon in English) where he climbs the summit. Colwyn Bay itself is mentioned in Quinn's diary as one of the Welsh places he passes through on his journey. Additionally the objects in the exhibition also include a collection of postcards published by the Snowdon Mountain Railway Company and a local guidebook from the 1930s.

As Quinn travels on his odyssey it is revealed to be both a physical and metaphorical journey mediated by the British landscape, a geography that is both changed and unchanged since the 1940s. The ancient byways along which he has travelled remain as they were then, and yet with the immutability of change and the unremitting nature of time passing, lives and memories change and fade. At the exhibition, both within Oriel Colwyn and externally in the surrounding town, the viewer metaphorically and physically walks alongside Quinn and, in learning his story, may come to understand more about their own search for existential meaning and purpose in life.

While fictional, Davies has created Quinn in response to the real experiences of young men and women post-trauma, both in the early twentieth century and now. The life changes imposed on each generation by conflict and global socio-economic collapse, as well as personal tragedy, produces a constant stream of people left untethered in the world, often literally travelling in any way they can, to find a new home, a new purpose and to rebuild their place in the world. Although Davies initiated work on Quinn in 2014, clear comparisons to the Covid-19 pandemic can be seen in Quinn's own mourning for his previous life, demonstrating one more way in which Davies' series transcends time and place. Davies' work is concerned with stories and personal histories, employing a deliberate reworking of visual vocabularies with the intention of evoking a sense of recognition and narrative. Quinn: Until the Land Runs Out acts as a natural and significant continuation of Davies' work, further emphasised by showing at Oriel Colwyn and relating to her own personal connection to the North Wales landscape. 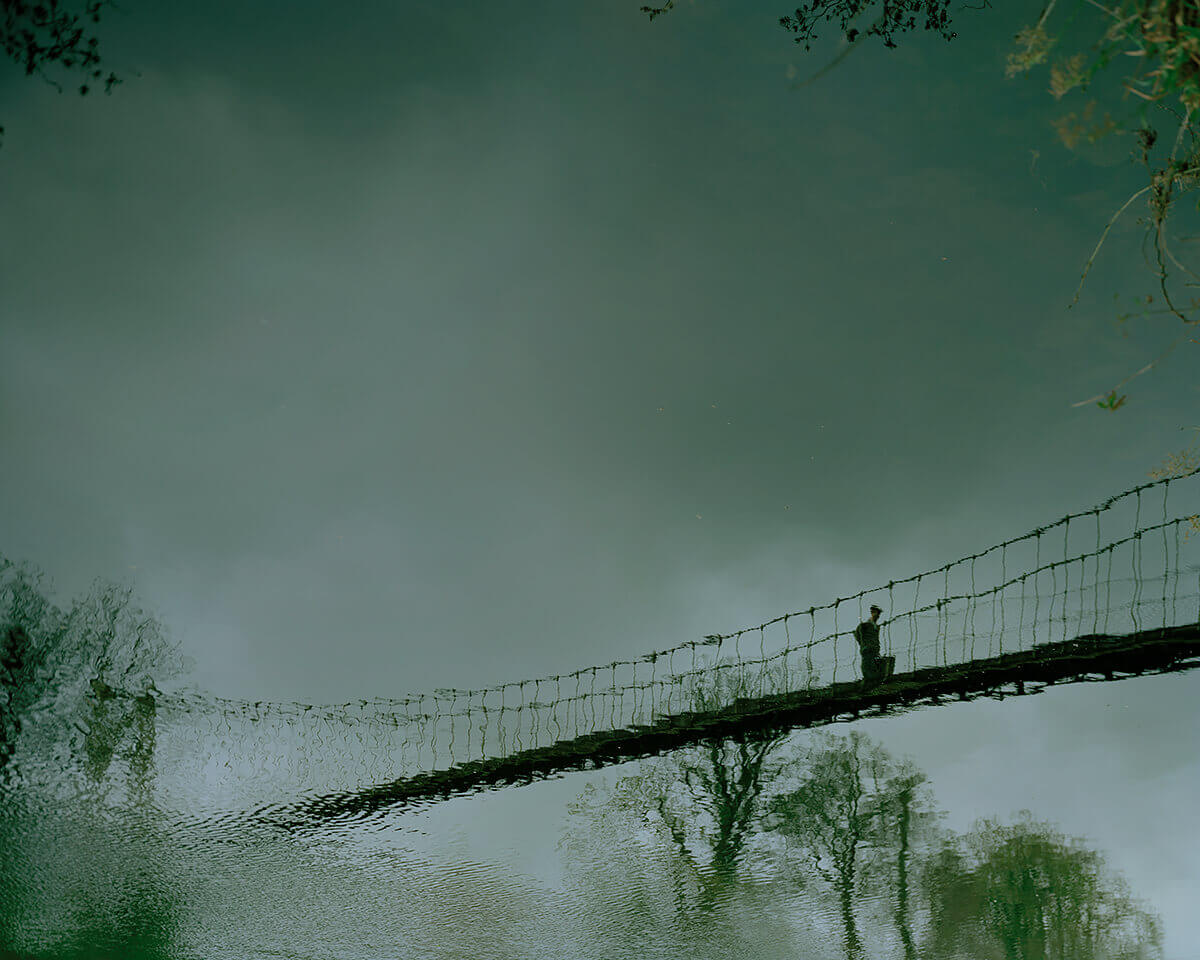 About Lottie Davies
Photographer, artist and writer, Lottie Davies was born in Guildford, UK, in 1971. After a degree in philosophy at St Andrews University, Scotland, she moved back to England to pursue a career in photography and is currently based in London and Cornwall. Davies' photography has been published in numerous newspapers, glossy magazines, books as well as advertising. She has won recognition in numerous awards, including the Association of Photographers' Awards, the International Color Awards, and the Schweppes Photographic Portrait Awards. Her work has garnered international acclaim with the image Quints, which won First Prize at the Taylor Wessing Photographic Portrait Awards 2008 at the National Portrait Gallery in London, with Viola As Twins, which won the Photographic Art Award, Arte Laguna Prize in Venice in 2011, with her series Memories and Nightmares which won the Young Masters Art Prize in 2012, and her collaboration on Dreams of Your Life with Hide & Seek/Film 4.0 which was BAFTA-nominated in 2012. Quinn premiered in March 2019 at FORMAT International Photography Festival in Derby, and continued to the Herbert Art Gallery & Museum, Coventry, at the start of 2020.
Lottie Davies' Website
All about Lottie Davies
More about Quinn A Journey 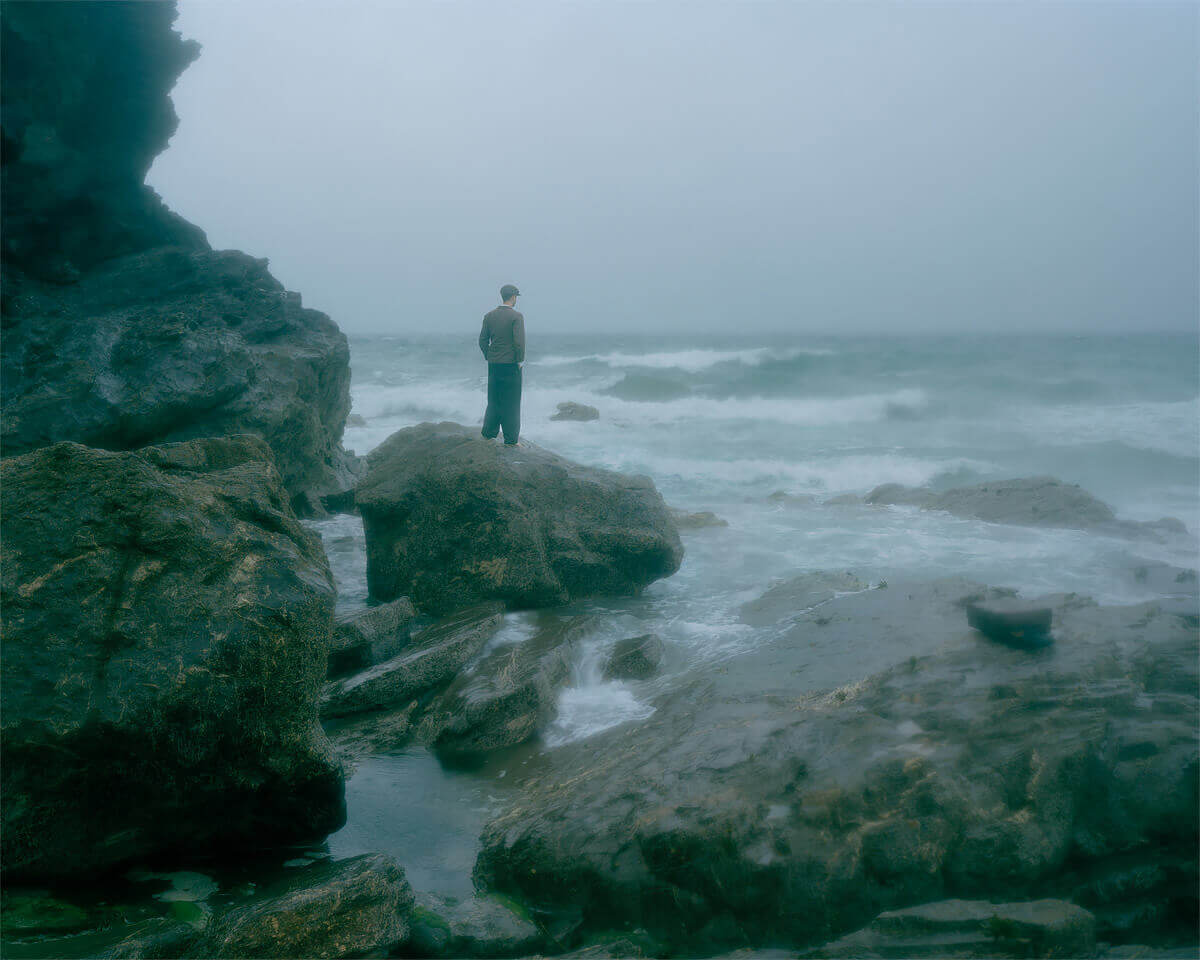 About Oriel Colwyn
Oriel Colwyn is a gallery space dedicated to showcasing photography and photographic works. Working with local, national and international photographers as well as current and up and coming new talent, it is North Wales' hottest photography space. Situated in the seaside town of Colwyn Bay in North Wales and housed within the historic Theatr Colwyn building, the gallery officially opened in the spring of 2012. Oriel Colwyn is the home of the biennial Northern Eye International Photography Festival, and past exhibitions have included work by Jack Latham, Niall McDiarmid, Tessa Bunney, and Marc Wilson. 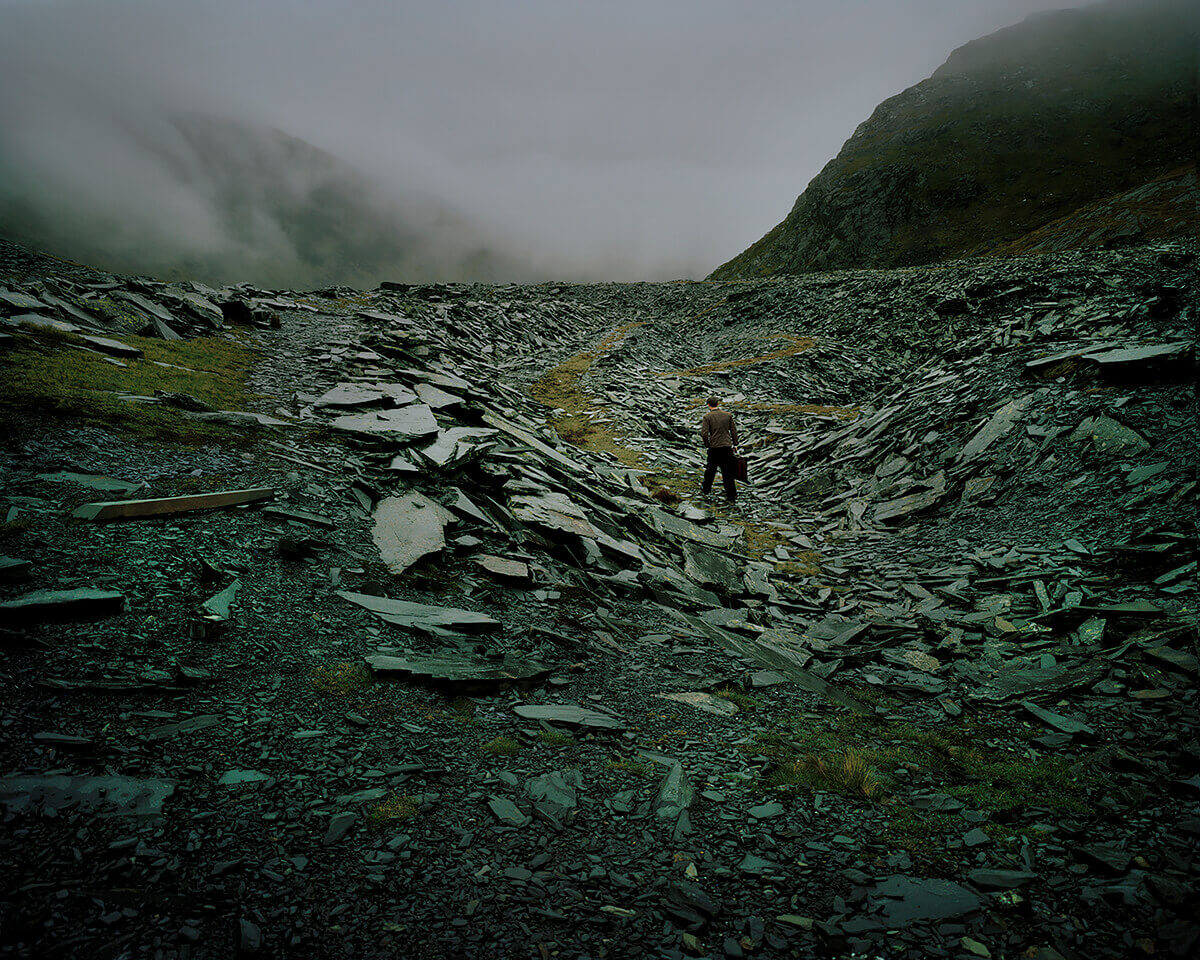