Kicking Sawdust: Running Away with the Circus and Carnival 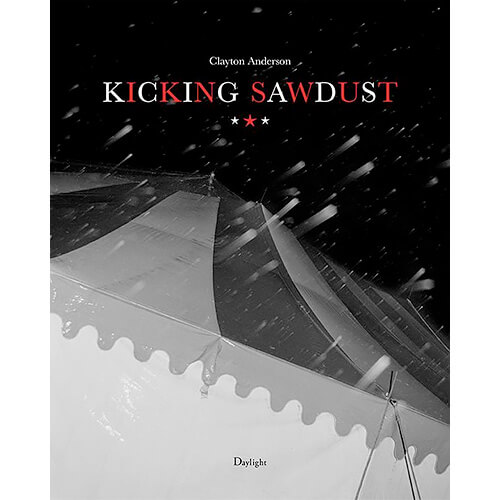 Clayton Anderson was living the life of a 19 year old, had secured a funky apartment near the water in Miami Beach, was waiting tables and hanging out with friends, when his life took a decidedly atypical turn. The courtyard payphone rang and his father on the other line said he needed to come help the family run their cinnamon roll concession with the travelling carnival. At the insistence of his artist friend Jack Pierson (who contributed the book's introduction), Anderson bought a camera and documented the years he was on the road between 1988 and 1992.

The resulting book of 75 black and white photos, Kicking Sawdust: Running Away with the Circus and Carnival, doesn't glamorize, it humanizes. While not the everyday experience for most, the collection of images normalizes the day to day existence of life on the road.

When daily life is shared-with anyone, in any context—this intimate kind of knowing facilitates the forming of a kind of family. Perhaps existing in just that one dimension, perhaps for only that specific time and space in one's life; but seeing people first thing in the morning, trading chores, witnessing the range of emotions humans navigate in daily life, familiarizes and connects. 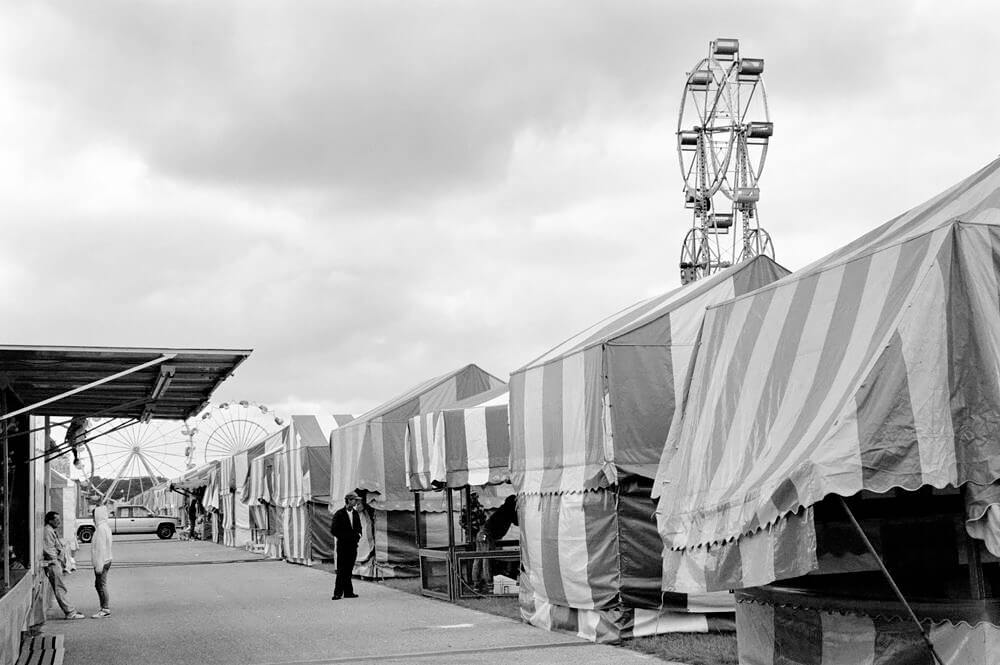 Behind the sequins and top hats, the flapping tent sides and animal menagerie, are people working. Their jobs are unusual, to be sure. They are counting money, manning ride lines, handling animals. They are posing for the camera, they are performing for the audience. But at the end of the day, with the costumes changed and makeup wiped off, they are people earning a living and living their life. The images in Anderson's book provide a glimpse into a way of being that is exotic and not, all at the same time. 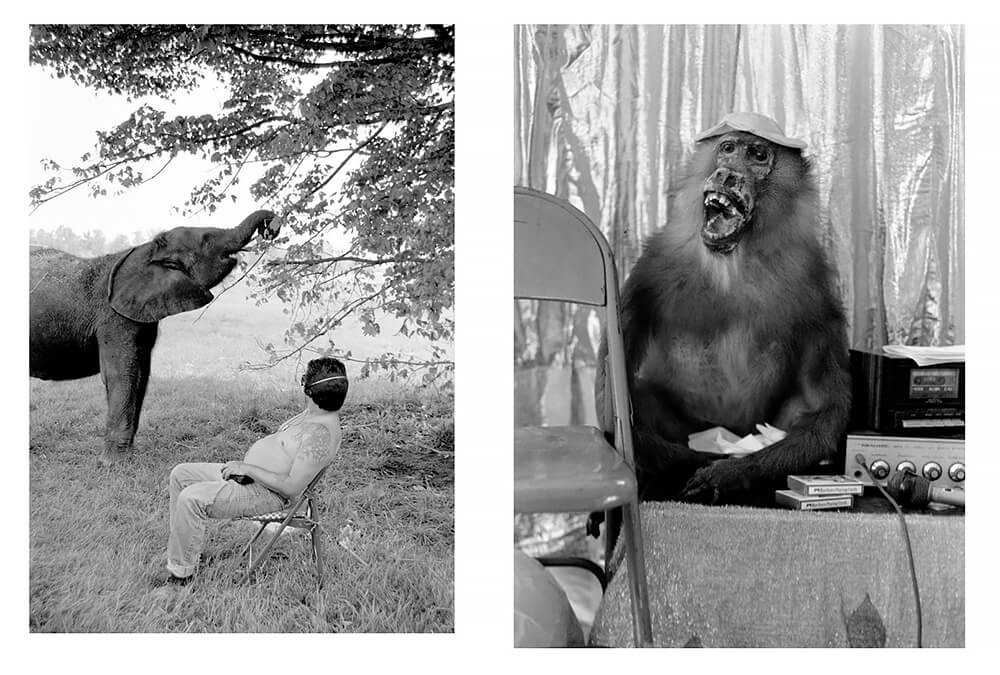 No borders, nothing. We are just who we are, together. And it's the same thing in all. The carnies are the carnies. It's just because you have to protect yourself, and so you get together and you feel comfortable, shares Dominique Jando, a 50-year international veteran of the circus arts. The window into this borderless lifestyle is opened up even further with a question and answer included in the book between Tessa Fontaine, an author/performer and Jando. Their conversation helps the photos unfurl even further in meaning and implication about the way of life, the roles, and the choices. Jando points out that there exists a code of values within the circus community.

Everybody knows who you are and what you can do, and you are respected for what you do, whatever that is. And no one thinks they are more interesting than the other because everybody knows the amount of work that has to be done to reach a certain level. So that's very healthy, in a way...Because you all know that, you all share the same values. The tenets and principles of the circus world are the same for everybody and everybody respects them.

The Evolution of the Circus, Sideshow and Fair
What we think of as the modern circus dates back 300 years to England, making its way to the still-young America before the turn of the 19th century. In her foreword to Anderson's book, writer and circus historian Katharine Kavanagh distinguishes between circus, sideshow, and fairground, and provides a window into how these art and entertainment forms have evolved throughout time. The mega, Las Vegas-style spectacle of Cirque du Soleil connects back to the sideshow form of entertainment in a very different way than the county fair of rural America. But yet this form of entertainment survives. She makes the point,

The prominence of new entertainment media and the backgrounding of traveling showfolk in the experience of public life, in turn, led to misconceptions that the traveling art forms were dying. In fact, they were doing what they always have—adapting and evolving. Within the smaller touring circuit of the United Kingdom, for example, the worlds of circus and fairground remained much more separated, and sideshow—when it appeared—was associated more with the fair than the circus. Seeing all three elements brought together in this book brings a sense of the magical universe that the combined shows of the United States created for their audiences in the last millennium.

In his essay, Pierson does highlight that this era of traveling entertainment has continued moving and evolving into something else, and Anderson's book is a time capsule of sorts. ...the gift he brought back nigh thirty-seven years ago from some of the last days such an evocative world existed. A world you could kick some sawdust in. 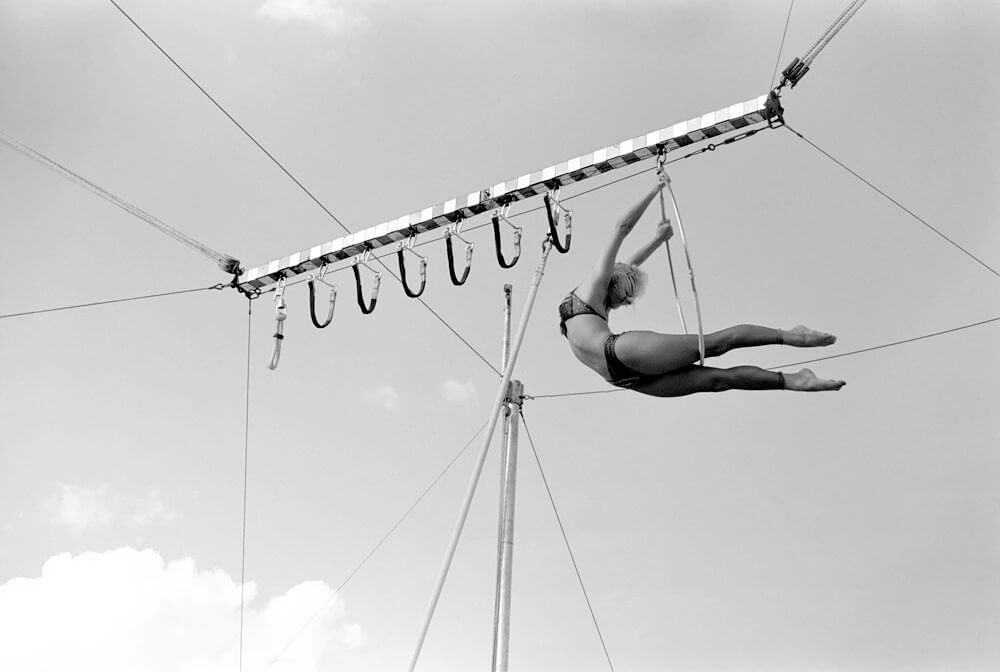 About the Photographer:
Clayton Anderson is a photographer and advertising art director who lives and works in New York City. This year his circus work was shown at the Florida Museum of Photographic Arts (FMoPA) in Tampa, FL. and the SE Center for Photography in Greenville, SC. In 2019, Anderson's self-published photo book, Before the Fade, was placed in the research libraries of the Met and MoMA. Prior to the onset of the pandemic, Anderson was working on The Burlesque Project which is a documentation of the vibrant burlesque scene in New York City. An on-going project is Anthropomorphia, a series of still lifes created during the pandemic which capture a range of emotions, explicit or implicit, in found, anthropomorphic objects. Selections from his Anthropomorphia series will be in a group show at the Praxis Gallery in Minneapolis opening in September titled Making Strange. Anderson worked for and was mentored by noted photographers that include David Seidner, Josef Astor and Philip-Lorca diCorcia. Kicking Sawdust, published by Daylight, is his first monograph.

About the Contributors:
Jack Pierson is an internationally exhibiting artist who has had recent solo exhibitions at the CAC Malaga, the Irish Museum of Modern Art, Dublin and the Aspen Art Museum.

Katharine Kavanagh has been writing about circus since 2013 when she launched The Circus Diaries—a multi-platform hub for critical discourse centered on the circus arts.

Tessa Fontaine is the author of The Electric Woman: A Memoir in Death-Defying Acts, a New York Times Editors' Choice, finalist for the Utah Book Award, and best book of 2018 from Southern Living, Amazon Editors', Refinery29, PopMatters, and the New York Post. Tessa spent the 2013 season performing with the last American traveling circus sideshow, the World of Wonders.

Dominique Jando is a widely published circus and popular entertainment historian, and has performed for, founded, or served as artistic director for some of the world's most respected circus organizations in the world. He is founder and curator of Circopedia.org, teaches at San Francisco Circus Center's Clown Conservatory, and is the international circus consultant for Guinness World Records, Ltd.

About the Publisher:
Daylight is a non-profit organization dedicated to publishing art and photography books. By exploring the documentary mode along with the more conceptual concerns of fine art, Daylight's uniquely collectible publications work to revitalize the relationship between art, photography, and the world-at-large.
Stay up-to-date  with call for entries, deadlines and other news about exhibitions, galleries, publications, & special events.
Advertisement