Alexandro Pelaez and the Magical in the Realism 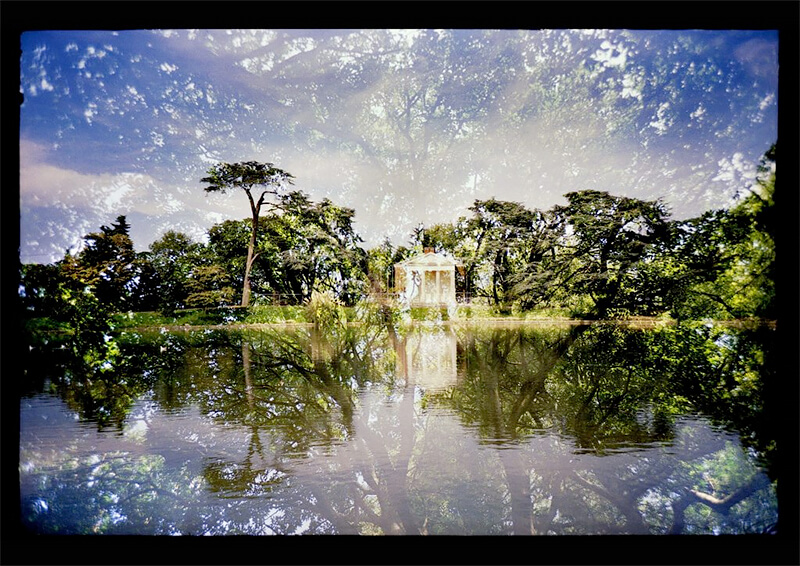 Bermondsey Project Space is delighted to announce its forthcoming exhibition, titled Eclectic, curated by Mara Alves. It consists of a series of analogue double exposure film photographs by the Caracas-born photographer Alexandro Pelaez documenting a derivative inspiration from a diverse range of sources, be they different locations or people - embracing diversity, multicultural roots and gazes from different countries. The solo show will take place at the Bermondsey Project Space, located at 183-185 Bermondsey Street, London SE1 3UW, from the 1st to the 12th of October 2019 during Frieze Week.

Magical Realism is a term typically associated with Latin American literature, where the roots of the genre took hold after the Cuban revolution of 1959, applied to a new type of writing known for its matter-of-fact portrayal of magical events. The term, an adaptation of the German Magic Realism (minus the -al), which had been coined in the 1920s as an alternative name for the artistic movement of New Objectivity, has since been variously used, in the worlds of both art and literature, often simply to refer to the magic of the day to day, and the realities that we miss as we go about our mundane tasks. Professor Matthew Strecher, an expert on the subject, defines it as what happens when a highly-detailed, realistic setting is invaded by something too strange to believe. For Venezuelan-born, London-based, award-winning analogue photographer Alexandro Pelaez, the concept has become increasingly relevant in his work over the past few years, as he has progressively developed a style of fiction, able to capture a realistic view of the modern world, simultaneously adding magical and, at times, almost unnatural, elements. 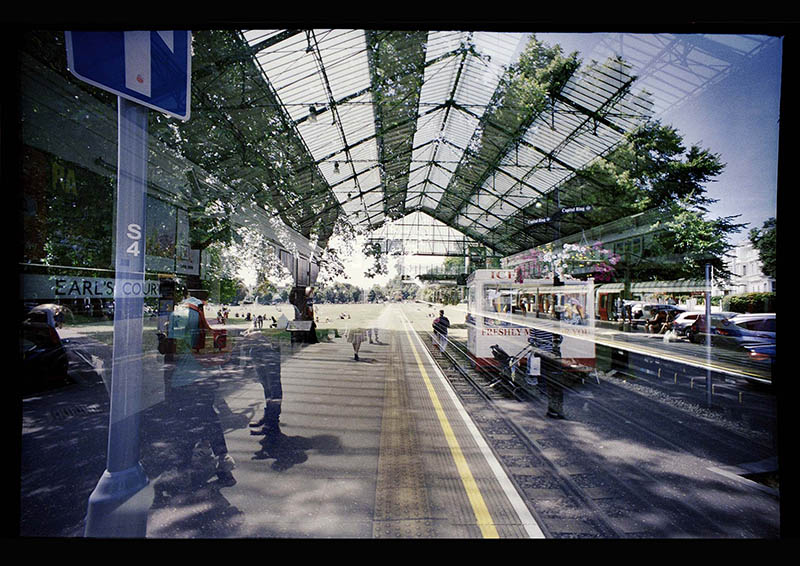 Pelaez achieves this primarily through his use of double exposure, meaning that you at once see both a real picture, but also a layer of the unreal or dreamlike. His pictures demand close observation, so that these details and layers may be unpicked - a task which is not always possible, since his scenarios are often so persuasive - and, either way, ought not some level of fantasy always be maintained, since to unpick it entirely would destroy the magic and leave behind mere reality? Pelaez began experimenting with the process of double - and even multiple - exposures in 2008, when he was creating his Heroes & Villains series using action figures. He has continued to develop the process in more recent work. Using his LC-A Lomography film camera, he takes the first image, with no specific duration between that and the next - it might be a minute, an hour, or even a whole day. These two frames meld as one as early as at the stage of the negative. What you see there is what you get. There is no need for any superimposition or postproduction. The only postproduction work Pelaez carries out is, in fact, scanning in his chosen negatives so as to apply a little extra contrast to the colours, heightening their surreality. 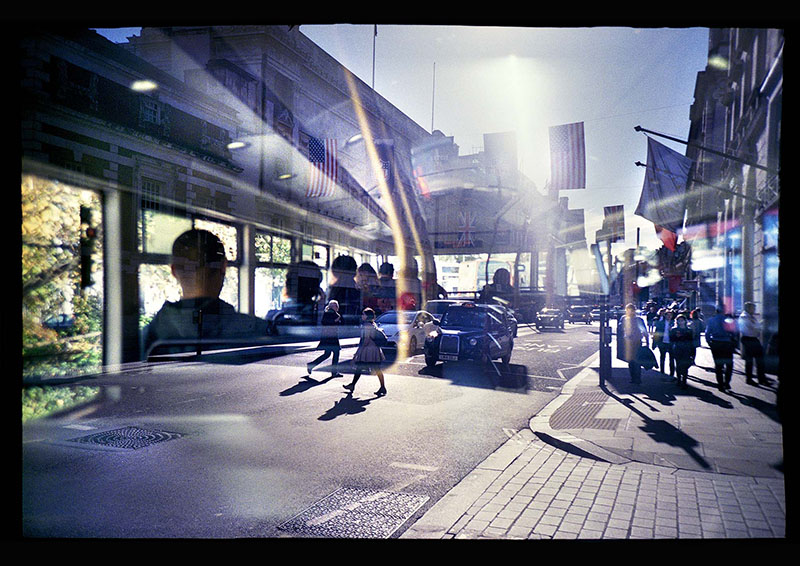 This current exhibition, curated by Mara Alves, is entitled 'Eclectic'. It draws from the Londoners series, which Pelaez has been working on since 2016, shooting almost every week, as well as from images of Chichester, Hong Kong, Miami, Rome, San Francisco, Seoul, Shanghai, Tulum, Venice and Vietri sul Mare. The selection process, therefore, of 28 images, was no simple feat - leading, in part, to the title. Another element is the breaking down of the works into four groups - cityscapes, street environments, moving-image works of the former, and landscape details - using different sizes for the printing of each set. For Pelaez, the resonance of eclectic meaning to derive from a broad range of sources is also significant, for, although using the same method, he always seeks to capture the uniqueness of the personality of every city or subject he photographs. Eclecticism, adds Alves, draws upon multiple theories, styles or ideas to absorb complementary insights into a subject - just like Alexandro's works - often without conventions or rules dictated, but with the same combinations of multiple different approaches. The variations in scale of the works on display invite viewers to become absorbed by the larger pieces - almost as if they were traversing the streets, or walking the parks pictured, noticing the many details and being surprised by the unexpected - while the small-scale images offer a certain tantalising intimacy, bringing the viewer in close, reminding them that this is but a photograph, something magical, not quite something real. 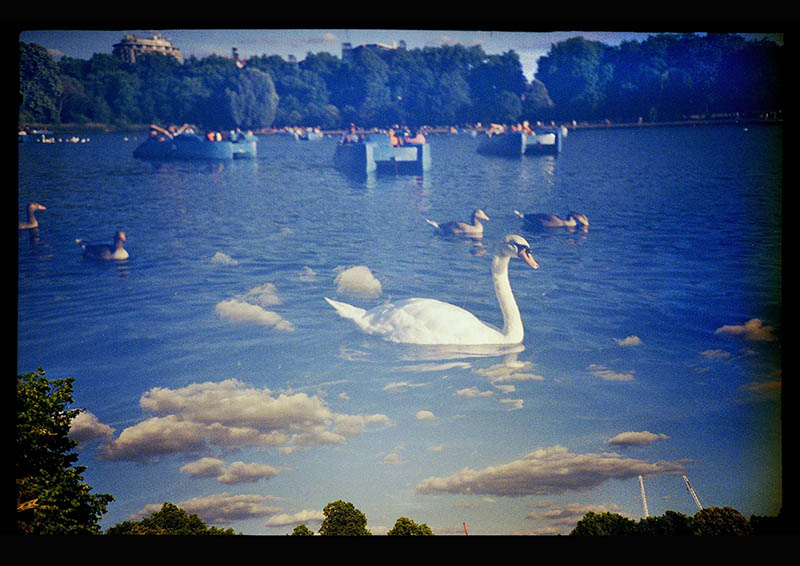 For each of the places Pelaez visited, there was a specific reason, be it work, holidays, or visits to family or friends. Some places he knew well, and thus he might have had a vision in mind for his shoots; others were new discoveries, where he had first to take time to get to know the environment, responding more instinctively with his lens. Rome, for example, is a city he has been visiting yearly since the age of two. His image of Piazza Navona is one of his favourites, showing the typical, old Roman buildings, their colours, the extravagant fountain, and the many street artists selling their work. To get the image he had in mind, Pelaez had to shoot a roll and a half of film in 40 degrees Celsius heat. I was going back and forth, shooting again and again, and changing the settings of the camera every time. I'm sure the tourists, the waiters - everyone - thought I was crazy! 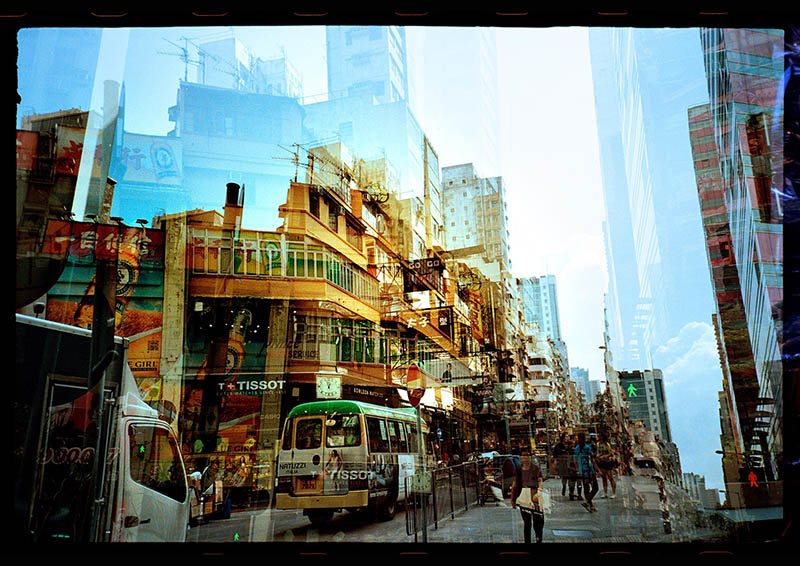 Another of his favourites is London in the Rain II. London has been my home for the last 18 years, Pelaez explains, and when I shot this picture (as for most of the series), it was a typical cold and rainy London day. I was sitting at the front of a double-decker bus, just entering Piccadilly Circus - when I finally saw the picture developed it felt like it was a version of Gotham City! But I believe it represents itself so well that it could almost be a self-portrait of London. 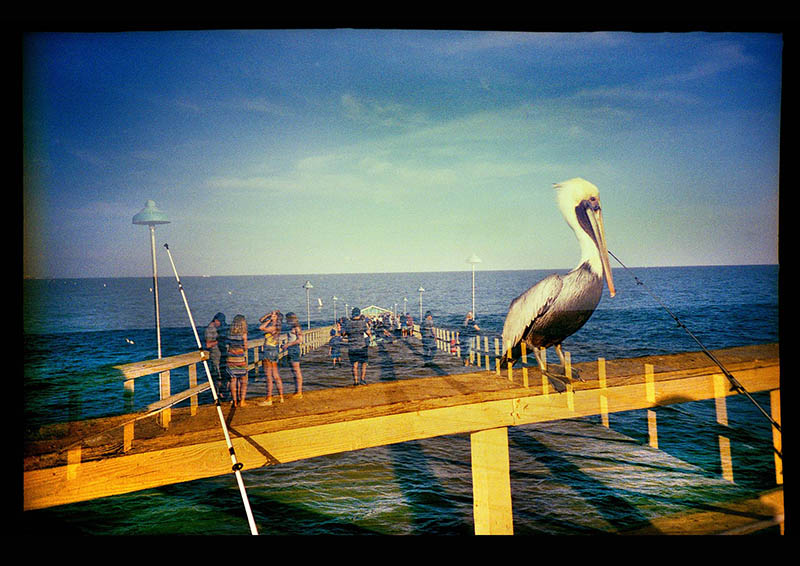 Lauderdale by the sea © Alexandro Pelaez

San Francisco, on the other hand, was a city new to Pelaez, and so, in this instance, he walked and walked, shooting continuously, collating potential material. I'm a bit of a perfectionist, he says, so when I am in a different country, I don't want to take any chances and not capture the image that I worked so hard on. By the second day, however, he feels, with hindsight, that he had an idea of what he wanted; of what he saw to be the true essence of the city. Nevertheless, no matter where he is, he continues to shoot, and, from a roll of 36 images, he selects on average just one or two to keep. 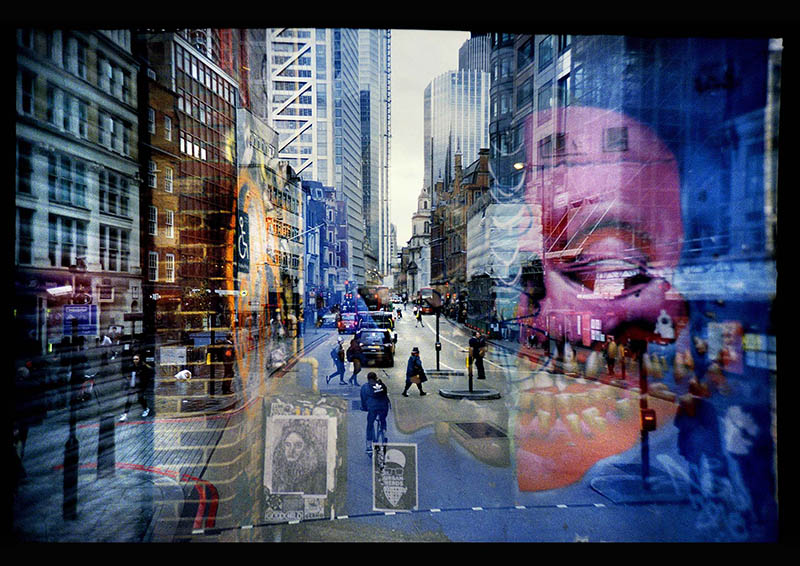 It is this search to capture the true essence that is Pelaez's driving force. I want all and nothing! says the artist, himself inspired by the likes of Ansel Adams, Peter Lindbergh, Emmanuel Lubezki and Steve McCurry. To capture that true essence of the moment or location is what inspires me. I love energy, so if I am walking on a busy street, I need to capture that vibrant scenario. I love it when there is a crowd, traffic, movement, and rhythm as well. I believe it gives the image life and lots of energy. If I'm shooting on a beach, however, I want to capture the calm and peace of it, the magic light of the sunset, or the strong colours of the blue sky or water and their surroundings. Again, eclecticism at play - Pelaez always tries to capture the vibe of the moment; what that particular and unique frame has to offer. The question one might ask, then, is whether what they offer him is the same as what they offer the viewer? For Pelaez, it doesn't matter. He loves observing how someone approaches an image for the first time, trying to understand what is happening, being captured by a detail, and then stepping back to process the picture in full, building their private narrative. And this is perhaps the most magical aspect in the overarching realism - the calling into play of each individual's power of observation and each individual's imagination; the taking them out of reality, for however brief a moment, to an otherworldly, dreamlike - and perhaps even eclectic - place. 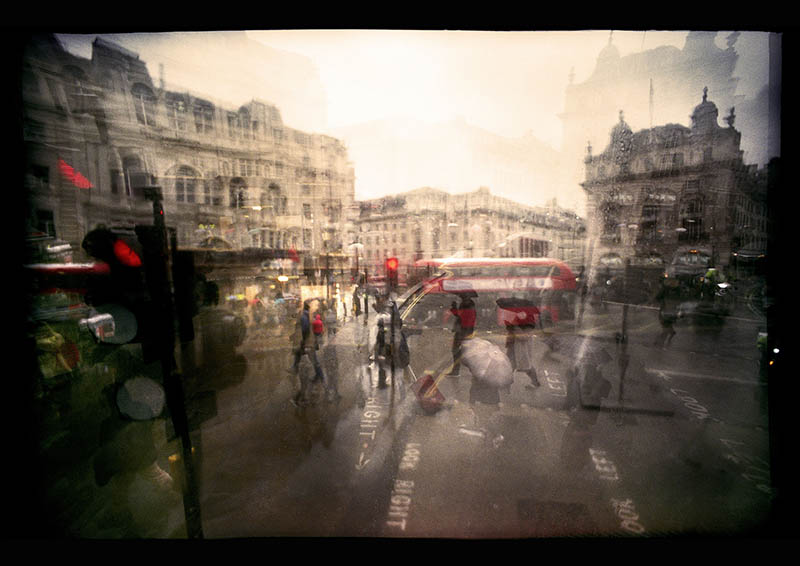 London in the rain © Alexandro Pelaez 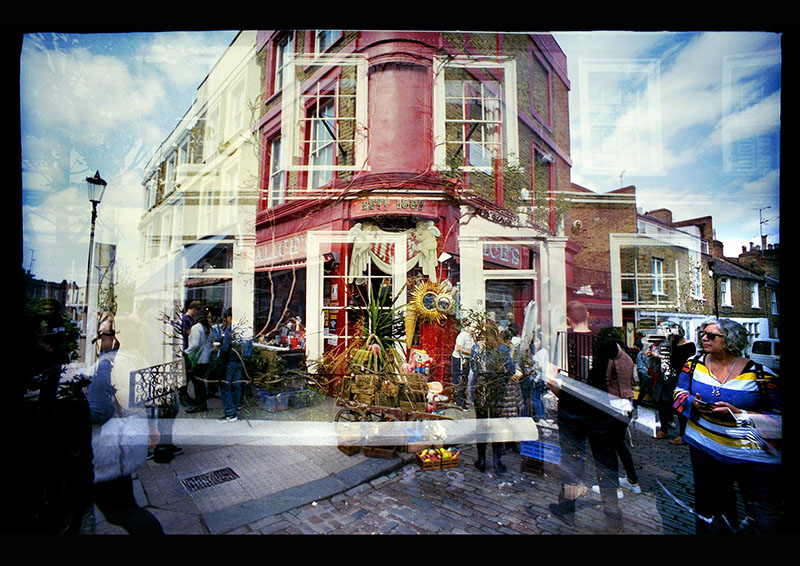 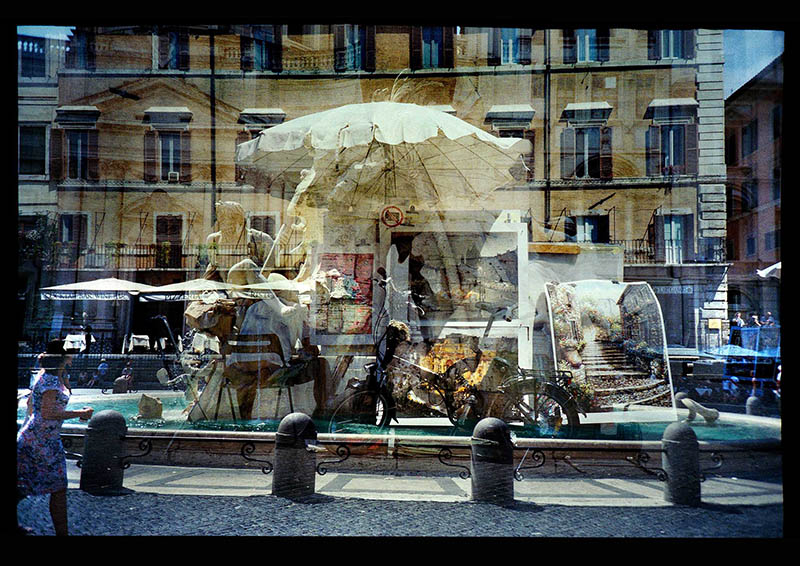 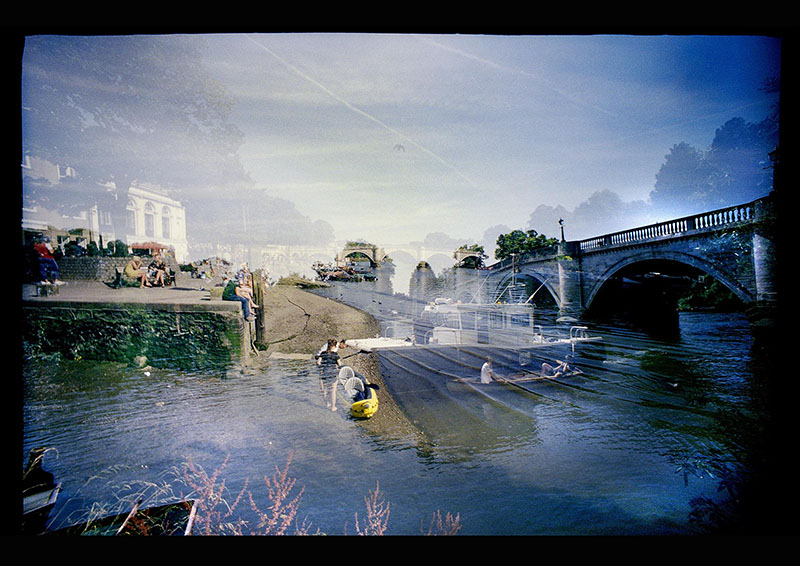 
All about the exhibition