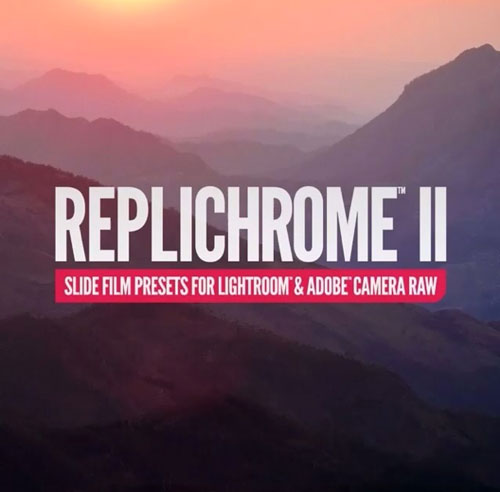 Totally Rad! Inc., the photography geniuses behind RadLab, Dirty Pictures, and Replichrome, have done it again and created Replichrome II. It’s a new collection of presets for Adobe Lightroom and Camera Raw that brings the classic look of film to digital photography. This launch comes after the success of the first Replichrome. The two products can be used together to create direct control over tone, color, grain and density.

Photography software company Totally Rad! Inc. (TR!) announced today the launch of Replichrome II: Slide, a new collection of presets for Adobe Lightroom and Camera Raw that brings the classic look of film to digital photography. Replichrome II includes presets for the most popular Fuji, Kodak and Agfa slide films, many of which were discontinued in the late 1990s and early 2000s. This second launch comes after the success of the first Replichrome, released in Fall 2013 to rave reviews by professional photographers.

We wanted to give photographers even more options with Replichrome II, said Doug Boutwell, CEO of Totally Rad! Inc. Similar to Replichrome I, the process took several years to develop due to extensive research involving a variety of cameras, film and images all processed through multiple labs and scanners. Users can once again emulate the most popular film styles on their digital images easily, but with more unique choices.

Replichrome II has 19 films and 203 presets available - all unique compared to Replichrome I. Users can choose from the different film options to apply to their images. The program is compatible with Adobe Camera Raw for fast and easy access to raw image formats. The film presets have Noritsu and Calibrated variants, each with several additional variations with varying degrees of contrast.

The Replichrome presets were created from the rise in popularity of professional photographers using film and a need to process digital images with the same look. Replichrome I and II are available now on www.gettotallyrad.com for $99 each. For a complete list of supported cameras, visit The Faqs

All about photo: We were able to try Replichrome II today and we were really convinced by the new set of presets! We were very impressed by the simplicity of the process, from the download to the installation and SO HAPPY to find the old films we still love despite using mostly digital cameras! We can't wait to try all the 19 films!