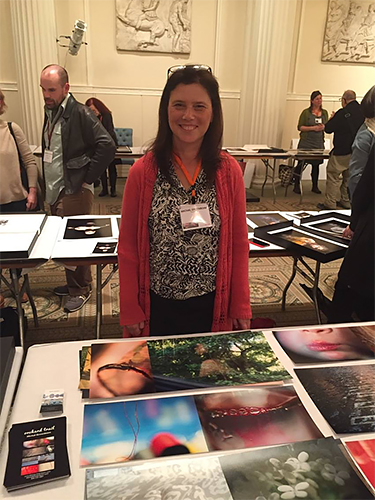 In April, I was reviewing portfolios at PhotoLucida in Portland, Oregon, and there at my table was an unassuming young woman who I initially thought was French and who had 2 things with her: a mock-up of a book as well as a huge stack of prints, all diptychs. I found myself flipping through the pages of the book and then pausing to look through a substantial number of prints and then back to the book and then back to the prints and back again to the book. The photographer was looking at me like I was a bit crazy and I actually don't think I've ever viewed anything in quite that way, but there was so much to see and there were also moments in the book that I didn't want to miss and pairings in the prints that were different than the book. The 20-minute review went by much too quickly and I found myself wondering how it all ended. Well, luckily for me, Michal Greenboim sent me a copy of her book, Orchard Trail.

The diptychs are brilliant pairings of beautiful things that can be interpreted in many ways. I kept noting what seemed like blood in her pictures...blood in a tube, pills sitting in a red slick that looked like blood, bubbles in water with a dense red liquid drifting down from them, red cloth, red threads...it's interesting to me how Michal photographed her subjects so delicately that even something that could be gruesome, just looks fragile and mysterious. There is an image of a child's lip, so pink and plump and also peeling, that it looks swollen and like maybe there's been an accident, something has gone wrong, but this mouth paired with a translucent pink onion slice balanced on its edge is somehow perfect. Somehow perhaps the whole book, each diptych, is about the tenuous nature of life. How everything is temporary and fleeting, the light, the shadows, the slowing moving red liquid, water droplets on glass, a couple's embrace, a leaf standing on its tip, a see-through figure against the cool green forest backdrop on a moving train, a perfect leaf sitting on top of the water, a jellyfish paired with an image of a new born baby sleeping, the child seeming to be illuminated by the glowing tentacles of the jellyfish. Amazing really.

I was reminded of Michal's images more than once this summer, not just with the arrival of her beautiful book that ends not with a quiet diptych that has a voice all its own, but ends with a single whimsical picture of light shining through a pair of glasses onto a child's drawing. It's another moment that won't last, but will bring us joy while we view it.

There is also a short essay by Cig Harvey, a wonderful surprise at the end:

Michal's photographs are like whispers. They speak quietly about important things: childhood, memory, secrets. Her photographs are harmonious, poetic and lyrical lines that use color to seduce and haunt. They trigger my senses, especially touch and smell.

Michal uses the camera to observe the world around her, often using a macro scale to pull us in. Her pictures explore a way of seeing that only the camera sees. I love that. She pushes at depth of field and focus to point at the way we might observe as children and the way we often remember as adults. She brings together disparate subject matter to create a deeper conversation about seeing. Really Seeing. The images become a mediation on form as a way to access memory.

I also was reminded of Michal's work when I recognized it in the midst of jurying a show in San Francisco. I was pleased to include one of her images into Dickerman's Prints' Wanderlust exhibition. Amongst travel pictures of prayer flags and gompas and Southeast Asia and the Peruvian Andes and panoramics of Iceland and Scotland and beyond, there was one of Michal's diptychs, a hand reaching through some greenery or really through a reflection, a magical dream in a show that was largely documentary (though somehow with myself and the other jurors being who we are, we were drawn to many of the alternative camera pictures). I also was excited to happen upon her work this summer in the landslide of projects submitted to Aint-Bad Magazine's Issue 12 competition, the curator's issue. Here is what Michal Greenboim had to say about her project:

A few years ago, I began making pictures every day. I didn't plan the pictures; they were not constructed. I just picked up my camera and responded to the world in front of me. The process was like keeping a visual journal. After a few years of making pictures this way, I gathered all of the images and studied them. I really looked. I saw that I had subconsciously been photographing my childhood. The pictures in front of me held deep memories of curiosity, innocence and wonder. They were my remembrances, wandering in the backyard, exploring moments like the sound of a tree, a bird in the sky.

I grew up in a small town in Israel called Parades Chana, which means Citrus Orchard. Our town was full of orange, avocado and mango orchards. I remember neighbors stopping by with mangos and giving our avocados in exchange. Kids would walk by themselves to the next-door-neighbors' for story time or a piano lesson. I remember going with my father to pick oranges from our orchard. When I look at the photographs collected I am reminded of who I truly am.

I look forward to my next encounter with the Orchard Trail and with Michal Greenboim's photographs. And you can too, since Paula Tognarelli selected her as one of the top winners of the Los Angeles Center of Photography's Fourth Annual Members' Exhibition. As one of these winners, Michal will be having a solo show of her work at the Griffin Museum in Massachusetts in early 2018! The LACP exhibition will be on view through August 26th at the dnj Gallery in Bergamot Station in Santa Monica, California, so make your way there before the end of the month!

Michal Greenboim grew up in a small town in Israel, developing an early interest in photography after watching her grandfather, who always had a camera on him to capture family moments.
Following a career as an interior designer and computer engineer, Michal later moved into photography, publishing her first book Orchard Trail, a narrative of childhood stories and memories, in 2016.
From 2012-2016, Michal exhibited her work in shows across the United States, including The Art of Photography Show in San Diego and at the Los Angeles Center for Photography in California, Photo Place in Vermont to mention a few. Her photograph Rear Blues won third place in the World in Place competition in the Sense of Place category, PDN Magazine, December 2016.
Michal now lives in La Jolla, California and working on her MFA studies.