Posted on May 31, 2022 - By International Center of Photography
Share 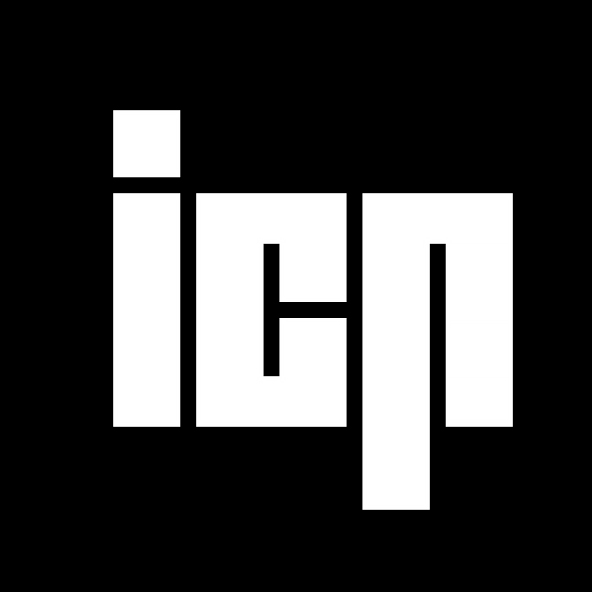 This summer, the International Center of Photography (ICP) will present a major retrospective exhibition of the work of the multifaceted artist William Klein. On view at ICP from June 3 through September 12, 2022, William Klein: YES; Photographs, Paintings, Films, 1948-2013 features nearly 300 works, filling ICP's galleries with photographs, paintings, films, photobooks, and other media from Klein's expansive and boundary-pushing six-decade career.

The first U.S. exhibition devoted to Klein's work in more than a generation, William Klein: YES is curated by David Campany, ICP's Curator-at-Large. Campany has worked with Klein for over a decade to bring together the diverse strands of Klein's global practice in painting, graphic design, street photography, fashion photography, documentary film, scripted film, and books. A fully illustrated book, written by Campany and published by Thames & Hudson, will be published at a later date. 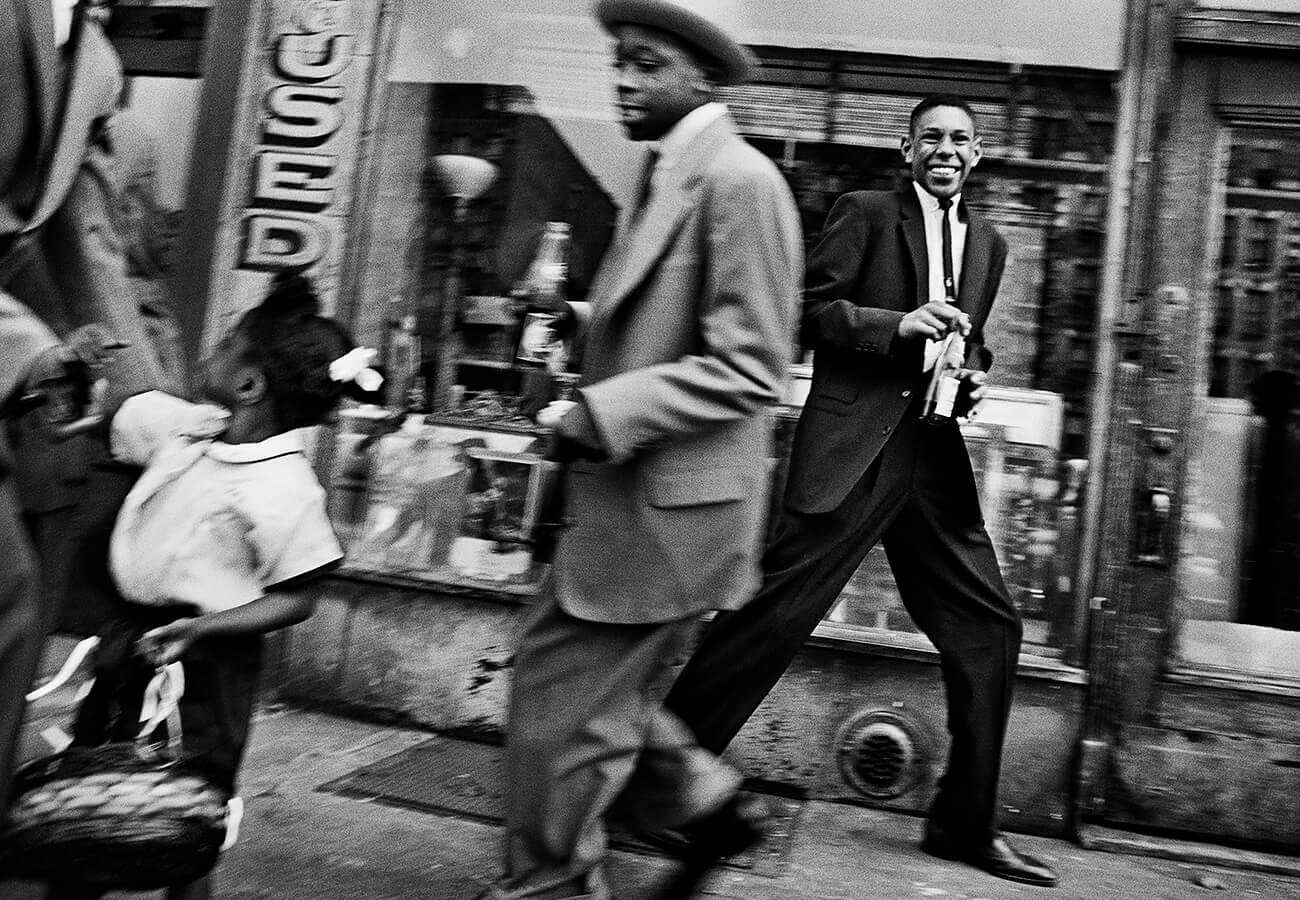 "For a long time, Klein was known as either a fashion photographer or a street photographer or a filmmaker, as different audiences knew and valued different aspects of his work. Only in recent years has the scope of his achievements begun to be recognized," said curator David Campany. "Versatility runs against the idea that artistic significance is based on single themes and recurring preoccupations. But artists like Klein, who ranged freely and avoided specialism, are key to understanding the culture of the last century."

William Klein: YES explores the artist's life and career in a rough chronology that shows his development as an artist and allows the connections between his different practices to become apparent. Klein's work on view ranges from wildly inventive photographic studies of New York, Rome, Paris, Moscow, and Tokyo to bold and witty fashion photographs; from cameraless abstract photography to iconic celebrity portraits; from excerpts of documentary films about Muhammad Ali, Eldridge Cleaver, and the Pan-African Festival of Algiers to scripted films about the beauty industry, imperialism, and consumer culture.

"This exhibition at ICP is a homecoming of sorts for Klein, who was born in upper Manhattan in 1928 and began his photography career on our city's streets," said ICP Director David Little. "He then became a truly international artist, living most of his life in Paris and capturing the unique character of global cities in his renowned photobooks. Klein is a living legend of image-making, and ICP is honored to celebrate a prodigious career that influenced and inspired generations." 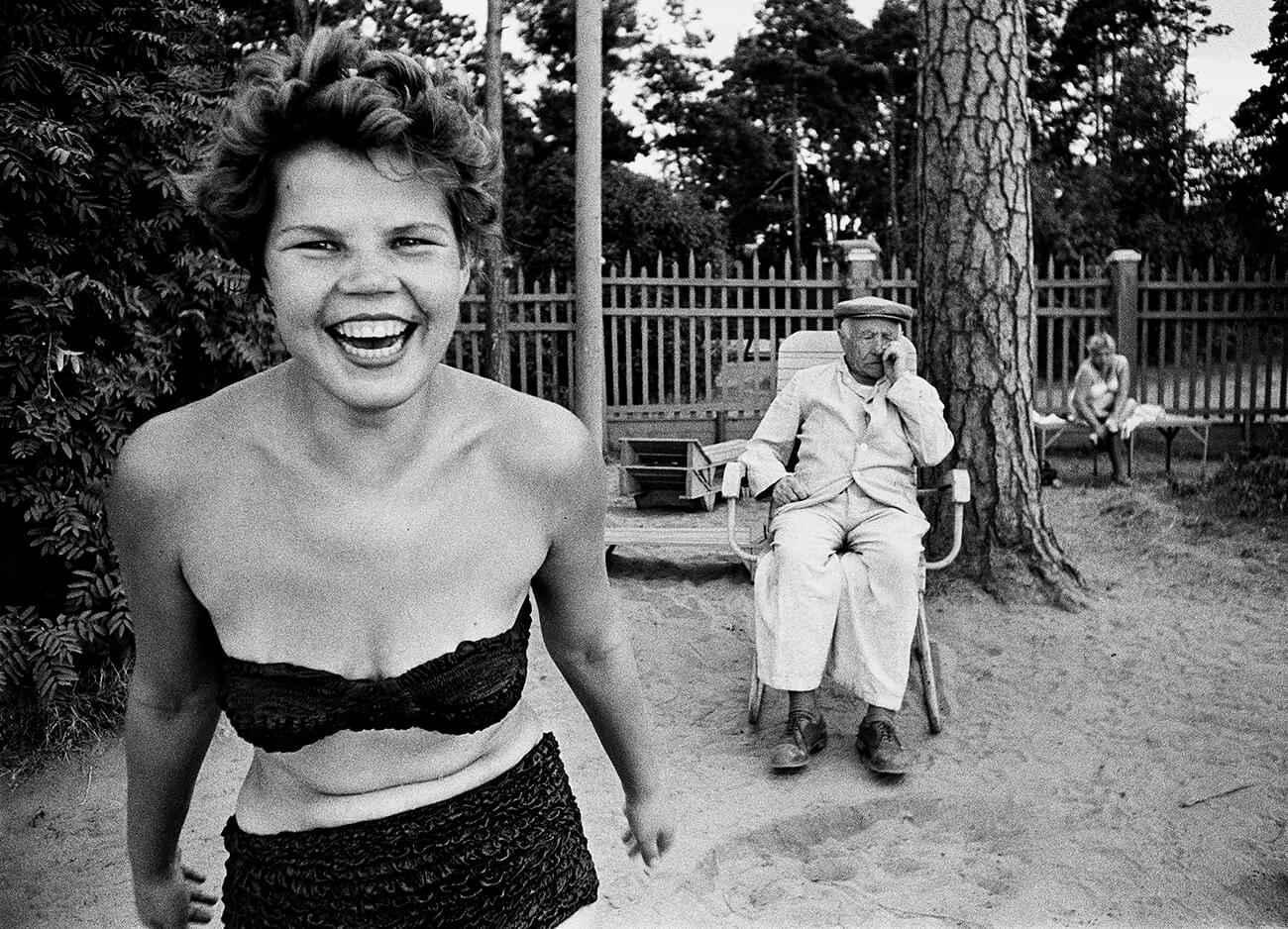 From Painting to Abstract Photography

An aspiring painter, Klein enrolled in the Paris studio of artist Fernand Léger in 1948, but Léger's advice was to instead explore design and new media, such as photography, film, and publishing. Klein persisted with painting and his 1952 exhibition of abstractions caught the eye of an architect, who asked Klein to adapt his paintings for an apartment room divider made of rotating panels, the original of which is on view in William Klein: YES. While photographing the panels, Klein's wife, Jeanne, spun them, making abstract blurs from the images.

Fascinated with the effect, Klein went into his darkroom and produced thousands of abstract photograms. He cut circles, diamonds, and square-shaped holes in paper and moved them around over the photographic paper during long exposures. The light produced dark marks, like graphic drawings, on white backgrounds. Highlights of these photogram experiments are on view in William Klein: YES, including Black Balls and Yellow Circles, Paris (1952) and Abstract Composition with Orange Cube (ca. 1952). 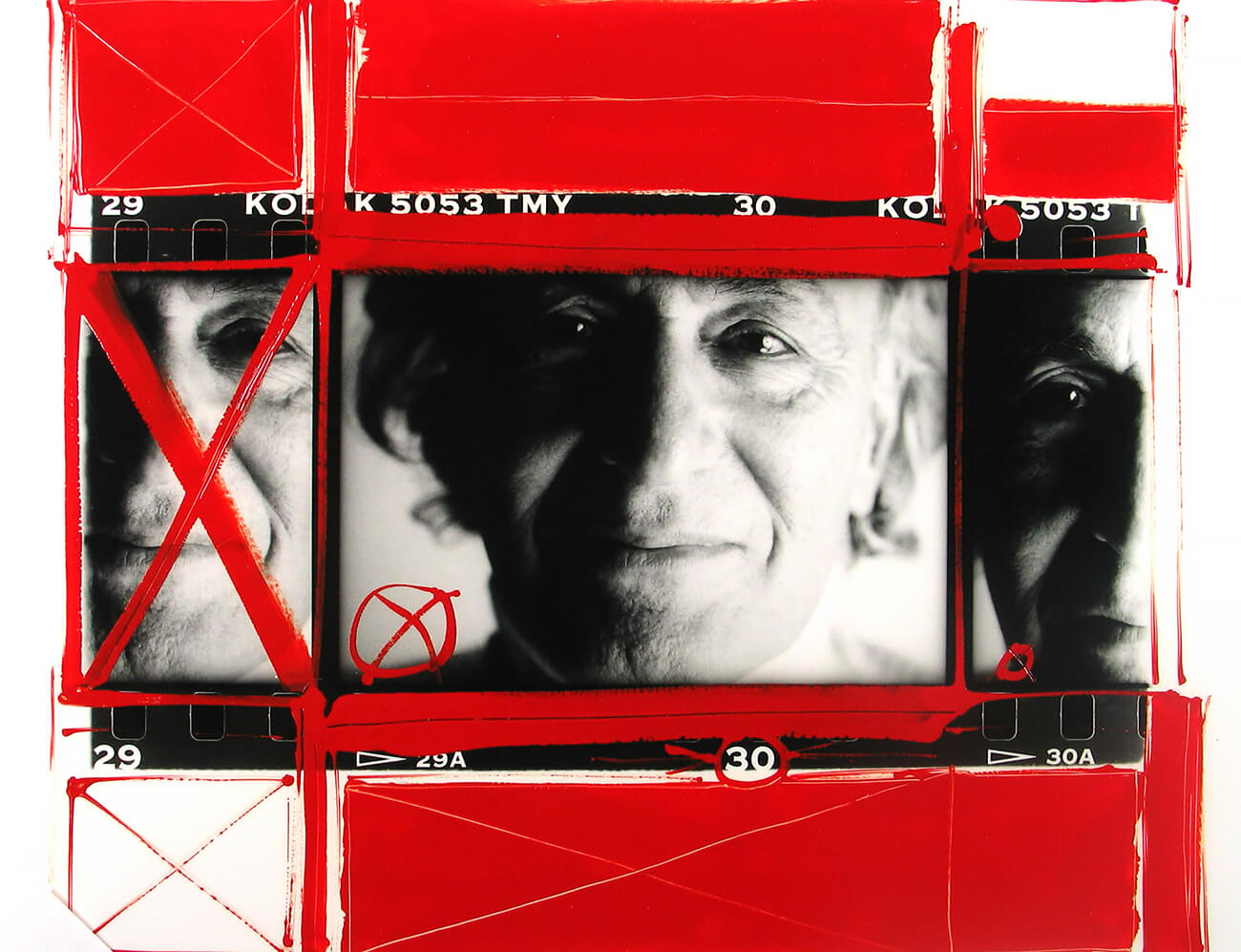 After eight years in Paris, Klein returned to New York at the invitation of Alexander Liberman, art director of American Vogue, who had seen his abstract photographs and paintings. He threw himself into the city with enormous energy and vitality. In his very first attempts at street photography he produced some of the most iconic and enduring images of the era. Highlights on view in the exhibition include Moves and Pepsi, Harlem, New York (1955) and Easter Sunday, Harlem High Hat, New York (1955)—street scenes imbued with energy and movement. Of these works, David Campany notes that Klein "never attempt[s] to be invisible, he is unmistakably part of each situation—interacting, collaborating, sharing, celebrating... These are willfully immersive photographs, and all the richer for it."

Klein knew in 1955 that his New York photographs should be a book. With no outside help, Klein selected the images and designed the layout and the cover himself. No American publishers would produce it. Life is Good and Good for You in New York - Trance Witness Revels (1956) was published widely abroad, influenced countless photographers, and is now considered a classic. Klein continued to explore cities worldwide and produced the celebrated photobooks Rome: A City and Its People (1959), Moscow (1964), and Tokyo (1964), immersing himself in the unique culture of each place.

Klein returned to his street photography roots in 2013, shooting in Brooklyn for the first time since 1955. The exhibition culminates with works from this series, including West Indian Day Parade, Brooklyn, New York (2013) featuring a close-up image of a dancing parade-goer that is among his most recent work. 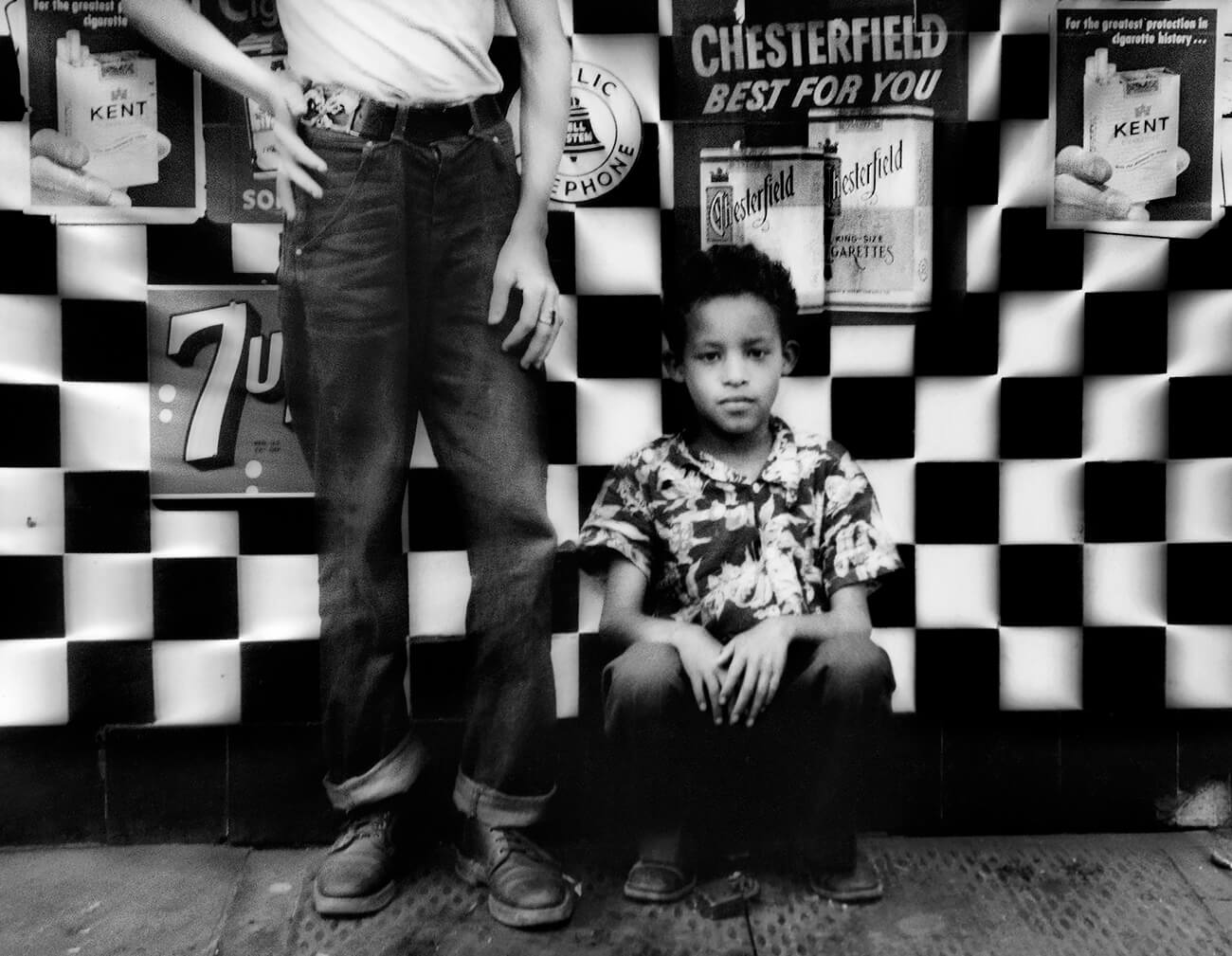 For decades Klein juggled commercial assignments around the world—including his "day job" as a fashion photographer at Vogue—with personal projects in photography, film, painting, and publishing. At Vogue, Liberman initially gave Klein still-life assignments, but he soon became an inventive and spontaneous fashion photographer, working collaboratively with models.

By the early 1960s Klein was the best-known and most exciting fashion photographer in the world, shooting for Vogue's American, French, and British editions, yet he treated it all like a game. He took models out into the street, such as a fashion shoot on a Roman crosswalk in Nina and Simone, Piazza di Spagna, Rome (1960), or photographed street scenes and blew them up as studio backdrops, such as the neon lights of Times Square in Dorothy and Formfit, Paris (1961). He introduced abstract light marks, such as those that he had played with in the darkroom, in Dorothy Juggling White Light Balls, Paris (1962).

Klein was pragmatic about his fashion work, saying "I accepted the obligation of showing the clothes. Sharp, all the buttons, pleats and whatever. As long as I did that, I found I could do pretty much what I wanted with the rest - backgrounds, attitudes, situations... Whatever, I guess the editors didn't care as long as the reader didn't flip the page too fast."

Klein's first film was Broadway by Light (1958), a vivid, jazzy document of illuminated signs in Times Square, which Orson Welles declared the first movie that truly needed to be in color. Since then, Klein has made 27 documentaries and three feature films, with subjects ranging from fashion, sports, music, dance, and opera to protest, war, and reflections on his own career. William Klein: YES will highlight films from his career, including a projection of Broadway by Light.

Klein's best-known documentary is Cassius the Great, 1964, featuring the young boxer Cassius Clay as he prepares to fight Sonny Liston. An early example of spontaneous filmmaking but without "fly-on-the-wall" objectivity, Clay improvises and spars with Klein's camera. Klein then made The Pan African Festival of Algiers (1969), commissioned by the Algerian state, about the 24-hour celebration of post-colonial, post-imperial independence. Klein filmed nonstop with several crews to capture the simultaneous events. Edited as a montage without narration, Klein plunges the viewer into the energy of artistic and political possibility. While in Algiers, Klein discovered that Eldridge Cleaver, exiled minister of information for the Black Panther Party, was also there. Klein filmed Cleaver intensively over three days and nights, giving him space to elaborate his shrewd analysis of white supremacy, but also to reveal his own complex psychology and unpredictable behavior. Eldridge Cleaver, Black Panther (1970) screened in the United States with seats at "revolutionary prices" and 50 percent of proceeds going to the Black Panthers.

Klein's scripted films Who Are You, Polly Maggoo? (1966), Mister Freedom (1968), and The Model Couple (1975) are serio-comic responses to the worlds of fashion, politics, and consumerism he knew so well as a photographer. Who Are You, Polly Maggoo? is a satirical look at the beauty industry, exposing the shallow cynicism and vanity of the fashion world, but with a profound concern for the humanity and well-being of the fragile central character— played by the model Dorothy McGowan, featured in Klein's "Fashion with Light" series for Vogue. The Model Couple is a comic but chillingly accurate prediction of "reality television" and the cynical treatment of individuals by corporations, as a young couple is filmed by a television crew around the clock and watched by a nation. 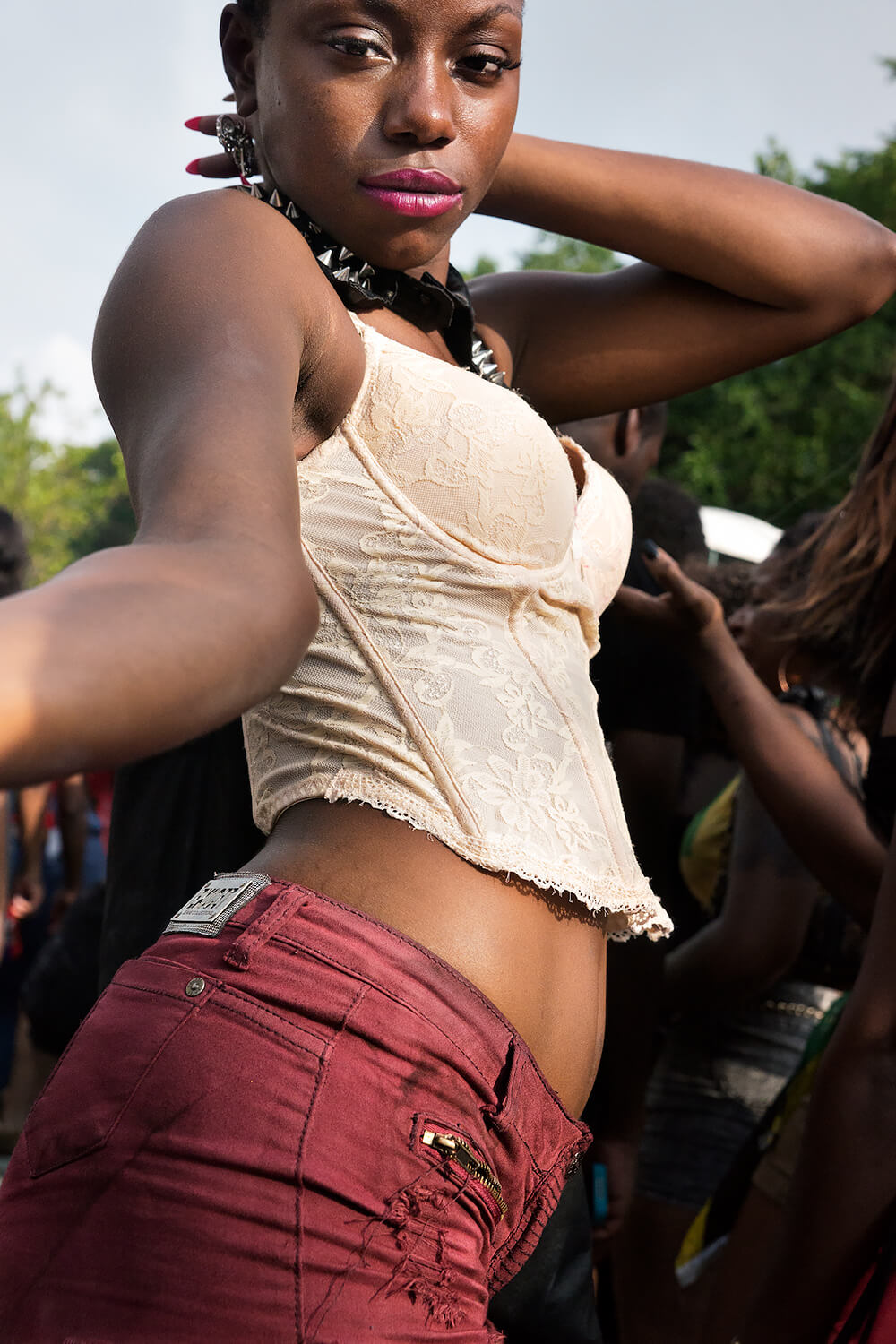