An Exploding World by Rankin 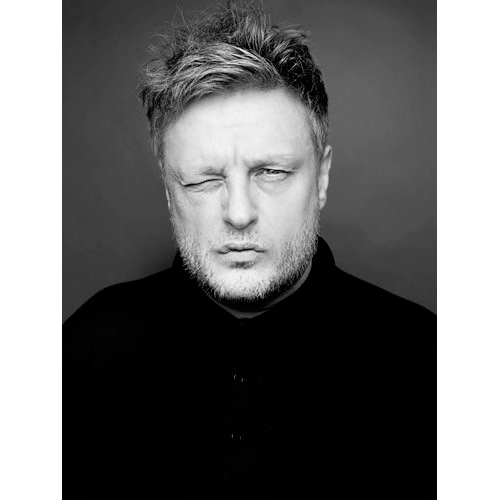 For years now I've been obsessed with the perfection of a dandelion seed head. Seen as weeds, they grow absolutely everywhere, especially in the city. And during a time of great stress, there was comfort in them. They continued to emerge, regardless of how out of control the world felt.

Growing up the idea of blowing them was associated with making a wish. You blew away their beauty to get something back from the cosmos. Their frailty was my gain.

The first time I set one on fire it felt like incredible therapy. There was a sense of jeopardy and transformation, a representation of fire as both cleansing and destructive. Each one looked like it's own little world and became a cypher for the world around me. It was apocalyptic on a small scale.

An Exploding World is how I got through lockdown. Through this project I was able to embrace working alone and take back control. Using natural imagery I could explore my own anxieties. A space for introspection, their exploding beauty makes this one of the most personal projects I've ever undertaken.

I started shooting a variety of flowers, but dandelions really spoke to me. There is a sense of nostalgia because they're part of everyone's childhood. Both fragile and strong, they appear everywhere. In a time when everything felt a bit out of control, there was a sense of optimism seeing them pop up. 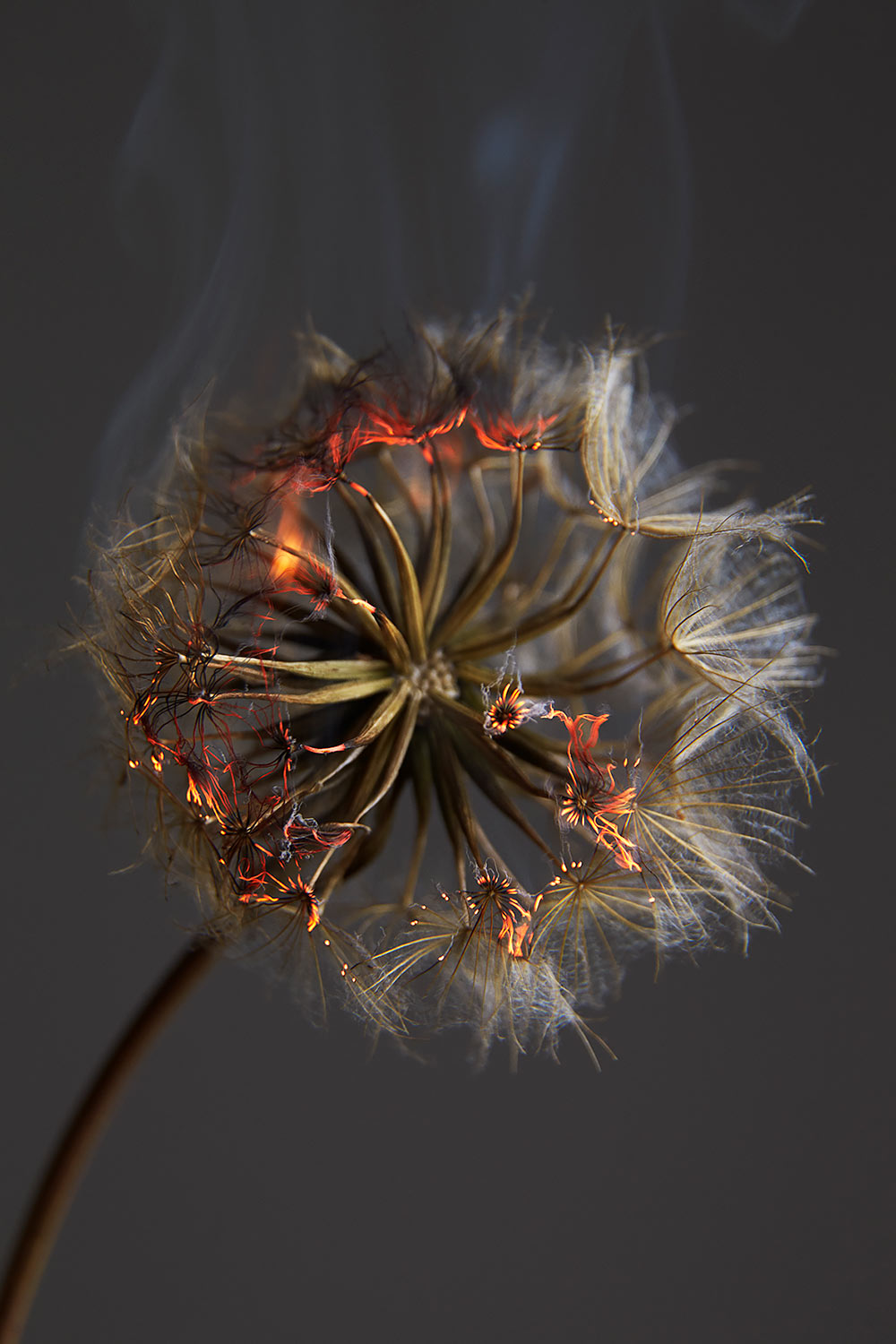 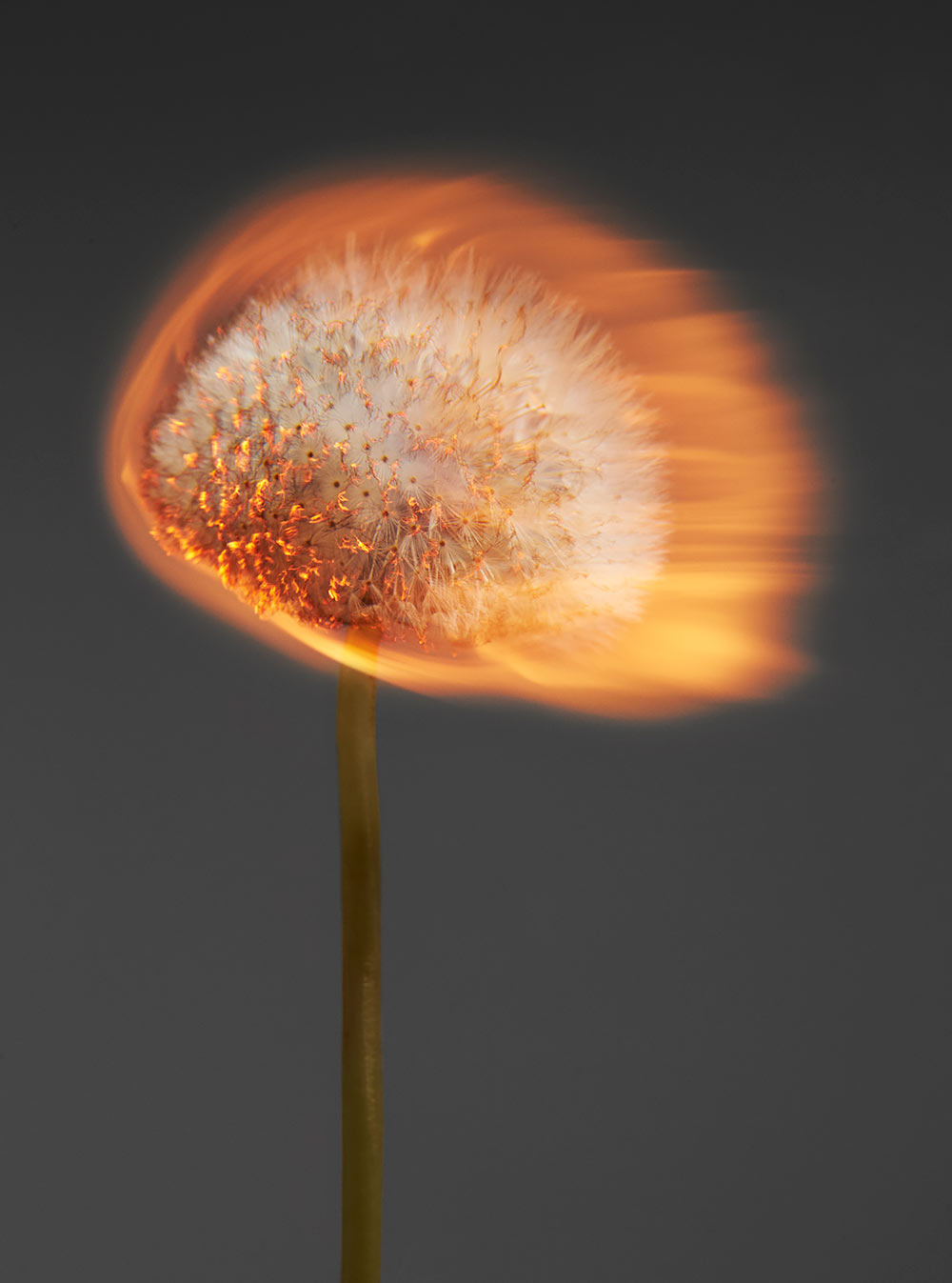 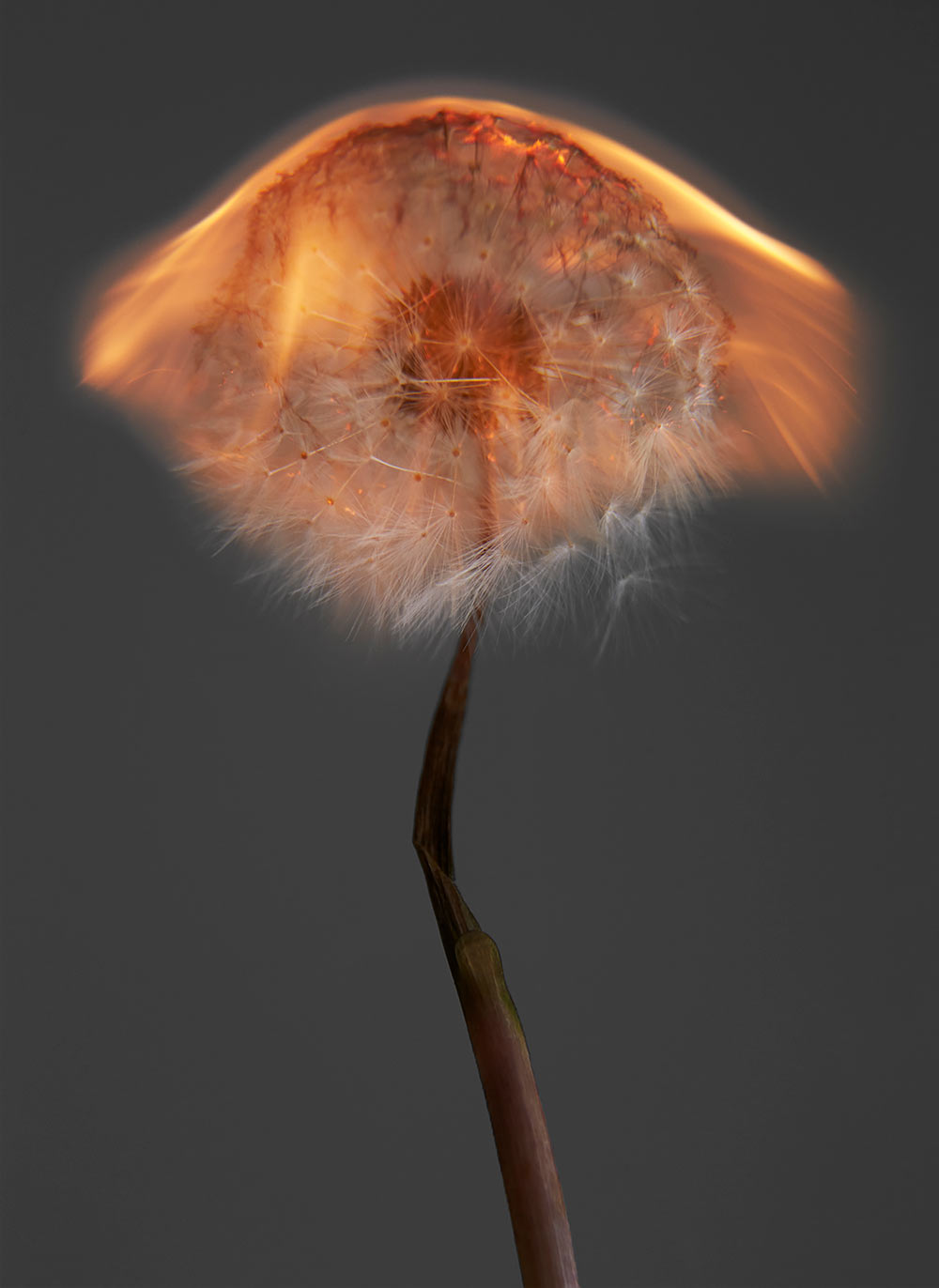 When we first went into lockdown in 2020, I found myself feeling quite frustrated. I love to work and for the first time in my career I was isolated from my studio and my team. I couldn't work with a model or a celebrity, my creative outlet was shut down.

When the itch to create got too bad to ignore, I created a makeshift studio in my home. I took our guest bedroom, utilising the natural light, and began working on still life. I think most photographers will photograph flowers at some point in their career, and it became incredibly fulfilling to work alone studiously and hone my craft in a way I hadn't had to in years.

It actually took me a while to set any on fire. It felt a little blasphemous, I was almost too in awe of their beauty and perfection. But the first time I set one alight, that transformation was addictive.

Every single dandelion is different and they burn differently. It can look like comets or atomic bombs, and in a fraction of a second they go from chances for new life to images of the apocalypse.

It felt like a real visual metaphor for the world around me. All of life was right there in one moment.

Fire is a really interesting subject to work with. Technically it's difficult to capture and also graphically it really does stand for so many things. I think it's interesting that many people's first responses to images in An Exploding World is to think of Hell, global warming and the end of the world, but at the same time you can read them as images of rebirth. 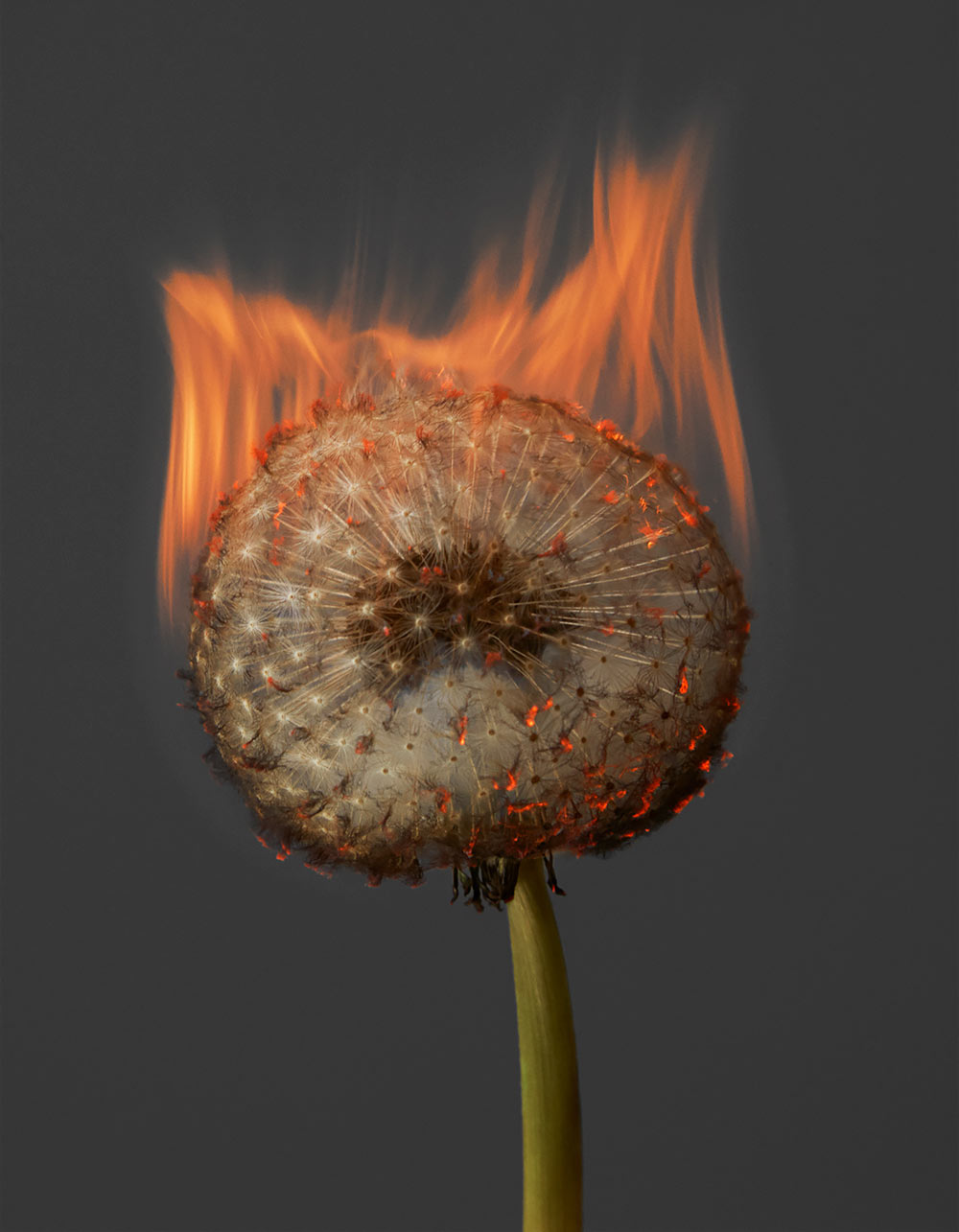 When fire burns through a forest, the old growth burns away to allow space for the new forest to emerge. Through burning these dandelions I was clearing space mentally. Finding a new outlet for my creativity.

My still life works feel like some of the purest images I've taken since the 90s. All the hallmarks of my photography are there, but for the subject matter. They exist in the same world as my portraits or nudes, a fresh realisation of my fascination with, amongst other things, beauty and death. These two themes have fascinated me throughout my career. And, as I get older, they start to become more intertwined in my imagination.

Taking a portrait is a constant ebb and flow between the person behind the camera and the person in front of it. With still life I don't have that interaction, that push and pull. Instead I looked to bring in that sense of the unknown in how I set up my images. I started placing vases on the edge of tables, just about to fall, and that led to the burning images. I was looking to create a sense of frailty and, in a way, also humanity in each image through visual jeopardy.

An Exploding World was such a liberating thing to shoot, but being back in my full studio and getting back to my "normal" day-to-day it's no longer what I'm working on. That's not to say I won't revisit it sometime in the future, but for now this huge group of images really stands as a testament to a time and mental place.

Also I'm not sure my wife would be happy if I started it up again... She told me a few times "I really hate the smell in the house". The images are beautiful, but maybe she deserves a break from it too. 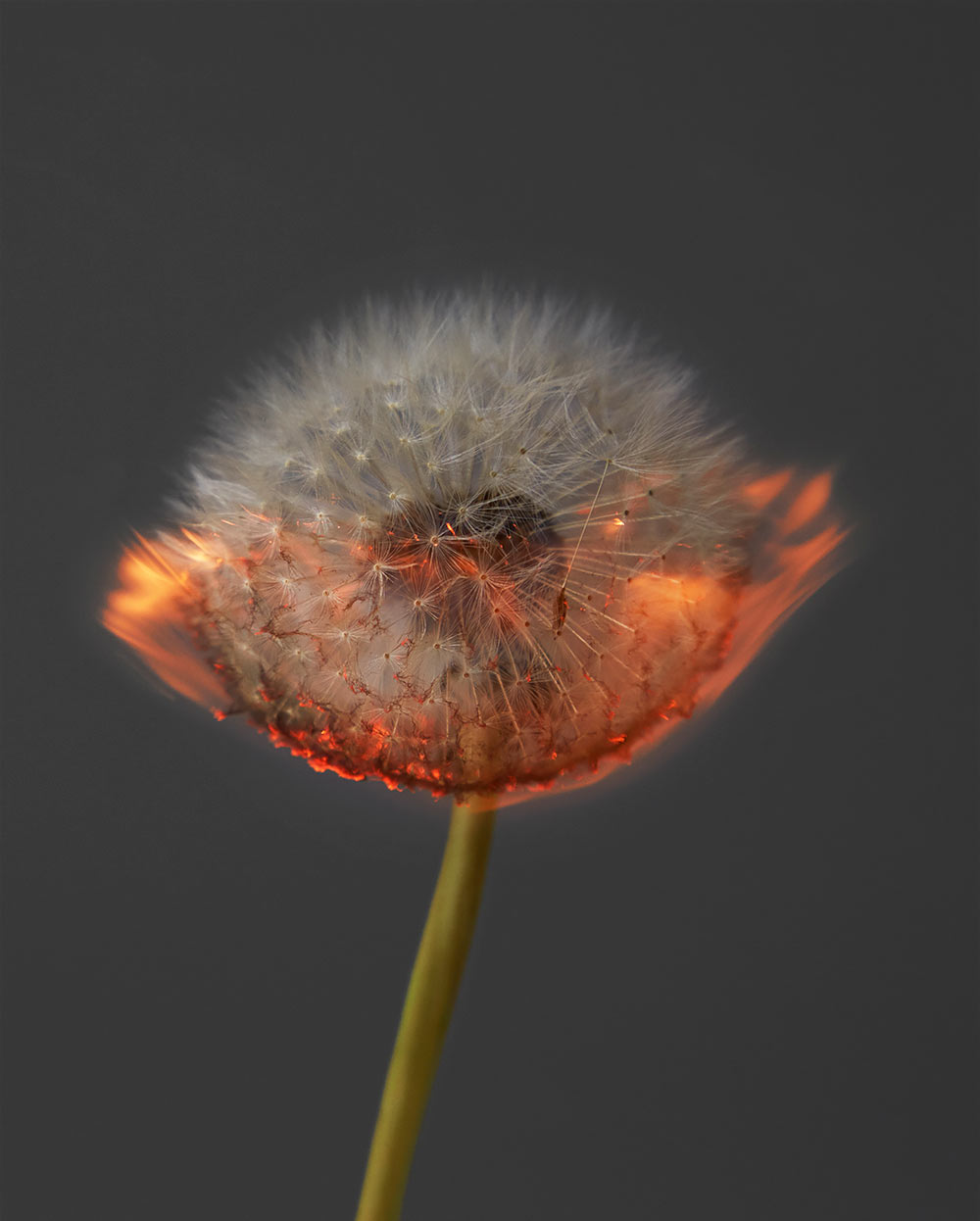