Crossings: The Magnum Square Print Sale in Partnership with Aperture

Posted on October 29, 2018 - By Magnum Photos and Aperture Foundation
Share 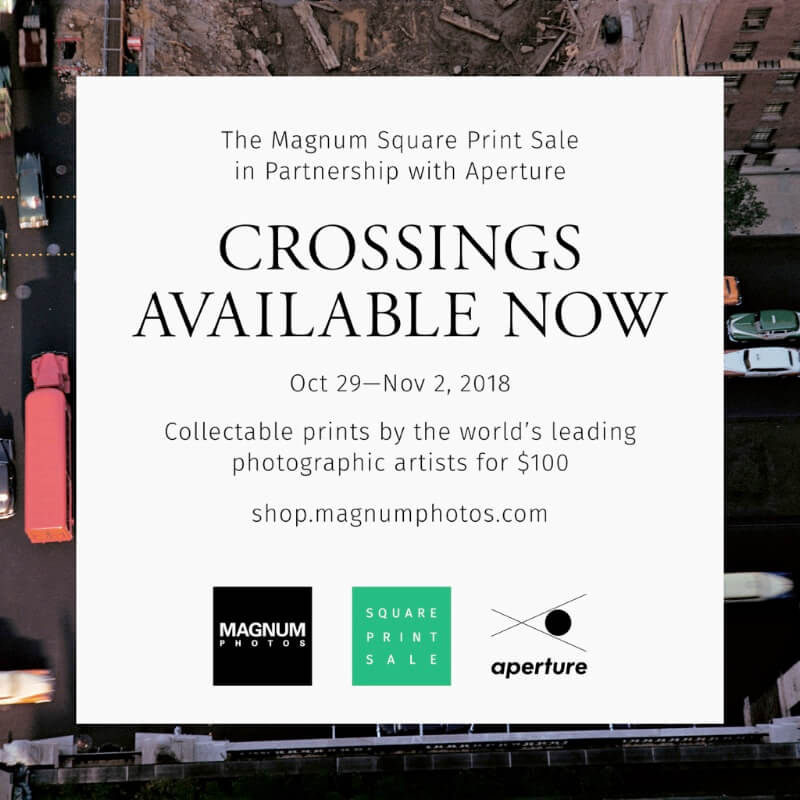 $100 museum-quality prints by the world's leading photographic artists available for five days only.

'Crossings' Magnum's Square Print Sale in Partnership with Aperture is an exceptional event that will last 5 days only. From October 29 until November 2, 2018 you will be able to purchase amazing prints, signed and estate stamped for $100 only. If you are a collector or just a photography lover, it is a once in a lifetime opportunity to purchase 6X6 prints by major photographers. 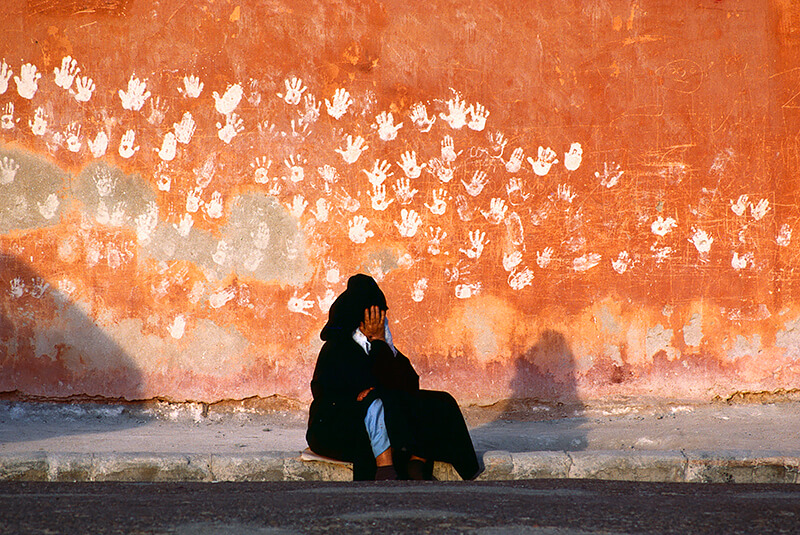 Bruno Barbey/Magnum Photos - Hands, a symbol of good luck, on a wall in Essaouira, Morocco. 1985.

Leaving their mark in every land they conquered, Muslim Arabs surged out of the Middle East into North Africa in the seventh century A.D., crossing the Strait of Gibraltar into the Iberian Peninsula. Known as Moors, they ruled in Spain for almost 800 years-until 1492, when they were ousted by Their Catholic Majesties Ferdinand and Isabella. The Moors left behind a cultural legacy still evident in both Spain and Morocco, where palm prints decorate a wall in the harbor town of Essaouira.
-- Thomas J. Abercrombie, When the Moors Ruled Spain, National Geographic (July 1988)

'Crossings', the November 2018 Square Print Sale, presented by Magnum Photos and Aperture Foundation, will bring together a selection of over 100 images by international artists, to explore perspectives on transition and transformation in photography.

Magnum Photos and Aperture have a long-standing, shared history, spanning many collaborations on publications and events through the decades. For the second time, Magnum Photos has invited a roster of artists published by Aperture to participate in the project alongside Magnum's own photographers, to visually explore a common theme through both classic and contemporary artistic practices.

The project will create an unprecedented visual dialogue, spanning depictions of physical crossings from one side to another-a road, a river, a border, an ocean-and the personal crossings that manifest in growth, revolt, mutation and self-realisation, the voyages of the mind that have the power to spark change and transformation.

Shared themes emerge across the images, from an examination of contemporary shifts in our understanding of selfhood and identity, to more macroscopic topics such as migration. In this way, 'Crossings' asks both literal and metaphorical questions about the human ability to move, transform and build connections.

The resulting selection of works is at the crossroads of documentary and conceptual practices. Celebrating the singular authorship of each artist, the curation encapsulates the diversity of practices found within photography. Spanning decades of artistic production, 'Crossings' is a testament to the major visual and thematic threads that, together, create our visual culture.

For five days only, these images will be available as signed, or estate-stamped, 6x6 prints. For the first time this year, the prints will be also exhibited at the Aperture Gallery in New York, in a special exhibition hosted by Airbnb Magazine for the duration of the sale, in a show open to the public from October 27th. 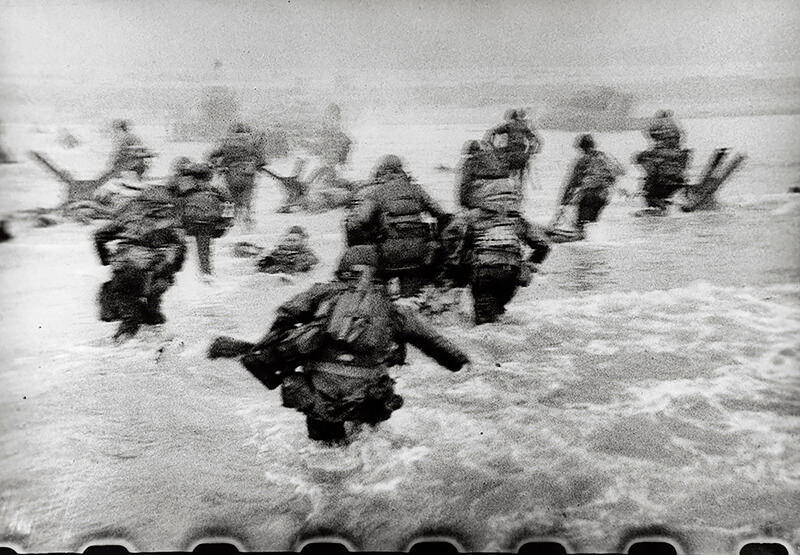 The water was cold, and the beach still more than a hundred yards away. The bullets tore holes in the water around me, and I made for the nearest steel obstacle... It was still very early and very gray for good pictures, but the gray water and the gray sky made the little men, dodging under the surrealistic designs of Hitler's anti-invasion brain trust, very effective.
-- Robert Capa, Slightly Out of Focus (1947) 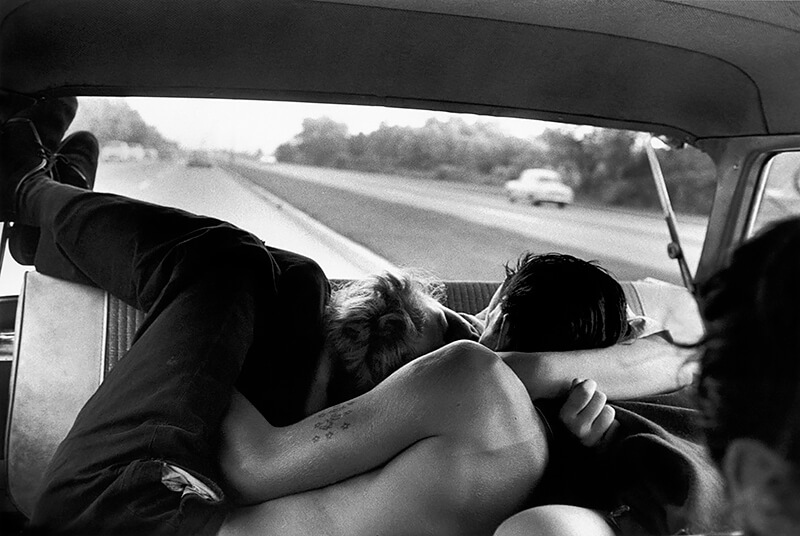 You're looking at Lefty and his girlfriend, members of a Brooklyn gang who referred to themselves as 'The Jokers,' on a trip to Bear Mountain State Park. This photograph is not meant to be risqué. These were young, teenage kids who had a great deal of spirit, energy and love in lives that were reckless, unstable and oftentimes dangerous. In the words of Pauley, who was a friend of gang member Bengie, 'We didn't come from dysfunctional families, the whole neighborhood was dysfunctional.'
At the time, I thought it was a little strange to be photographing The Jokers on the way to a state park, a trip sponsored by the Youth Board. The gang was completely out of their element. No mean streets, not a worry on their minds, just time to explore themselves and their surroundings. They were free, and it was captivating.

About Aperture
Aperture is the world's leading not-for-profit photography publisher. Founded in 1952 by photographers and writers including Minor White, Dorothea Lange, Ansel Adams, and Beaumont Newhall to serve as common ground for the advancement of photography. Aperture magazine-continuously published for 66 years-and the foundation's program of artists' and other books, and exhibition and education programs, have shaped our understanding and appreciation of the art and language of photography ever since. Aperture identifies and promotes the key voices defining new directions-the first to publish books by Diane Arbus, Sally Mann, and Nan Goldin, among many others-while advocating photographers' contributions to culture and society.

Aperture's participation in this Square Print Sale serves as a fundraiser for the institution's not-for-profit work, launched to coincide with its October 30th FAMILY New York City gala benefit. 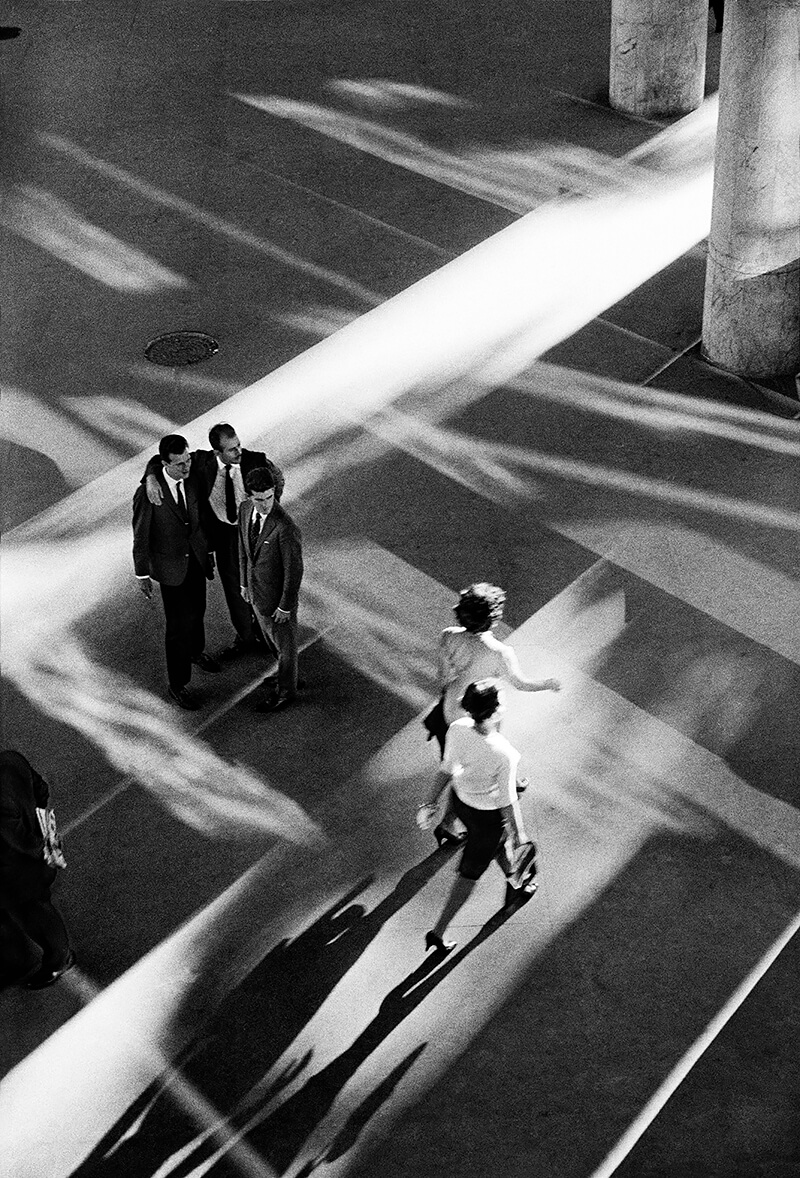 Go and discover for yourself, because the fantastic thing about photography is that you are able to freeze a moment that can never come back. 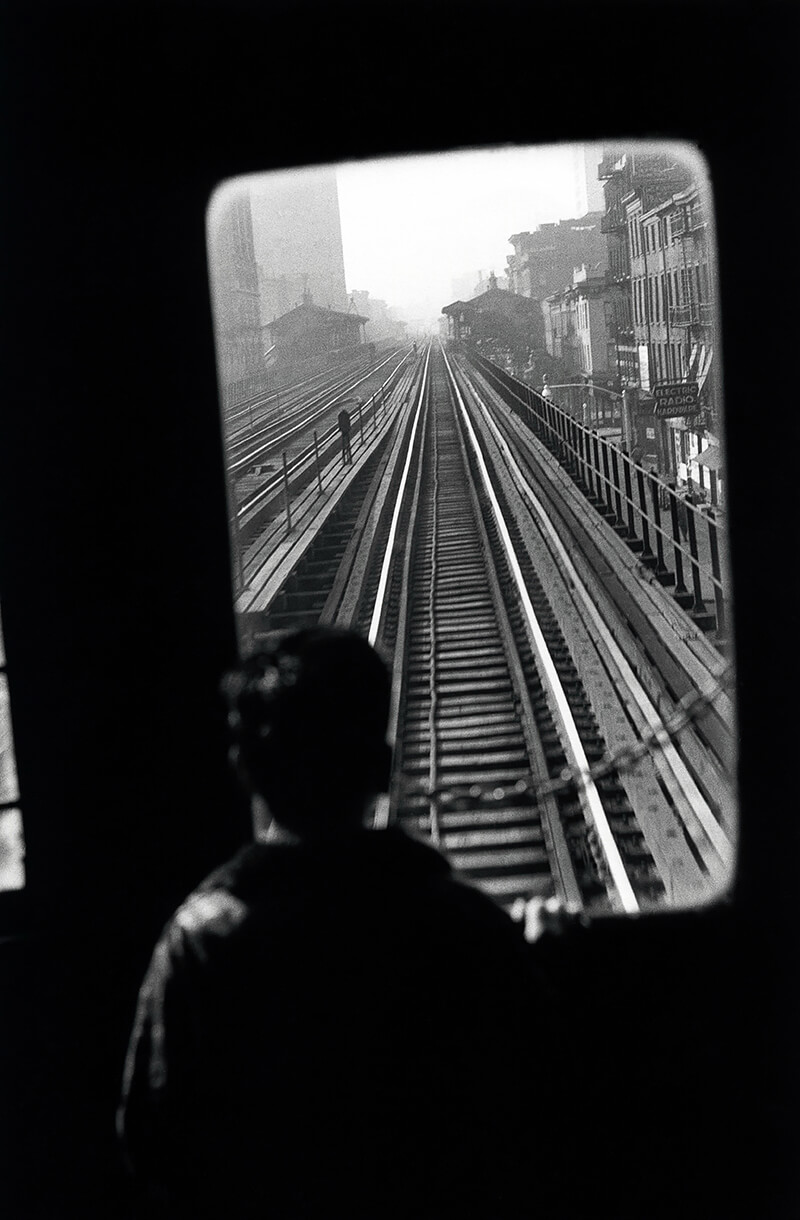 Elliott Erwitt/Magnum Photos - From Here to There. 2009.

In 2009, I went on a 10-day journey from the Port of Busan, South Korea, to the Port of Long Beach, California, on a Hanjin container ship. The ship was perhaps the most abstract space I’ve ever occupied, a mass transportation of goods in the ethereal light of the sea. I kept track of time with my daily diligence of photographing sunrises and sunsets, waiting and watching from darkness to lightness, then lightness to darkness. This photograph is a sunrise that centers the ship sailing into the horizon. This ever-present horizon can be seen as a transitional space that we move toward and through, but mathematically, based on the ship’s height, is always 12 miles away until shore is reached.” 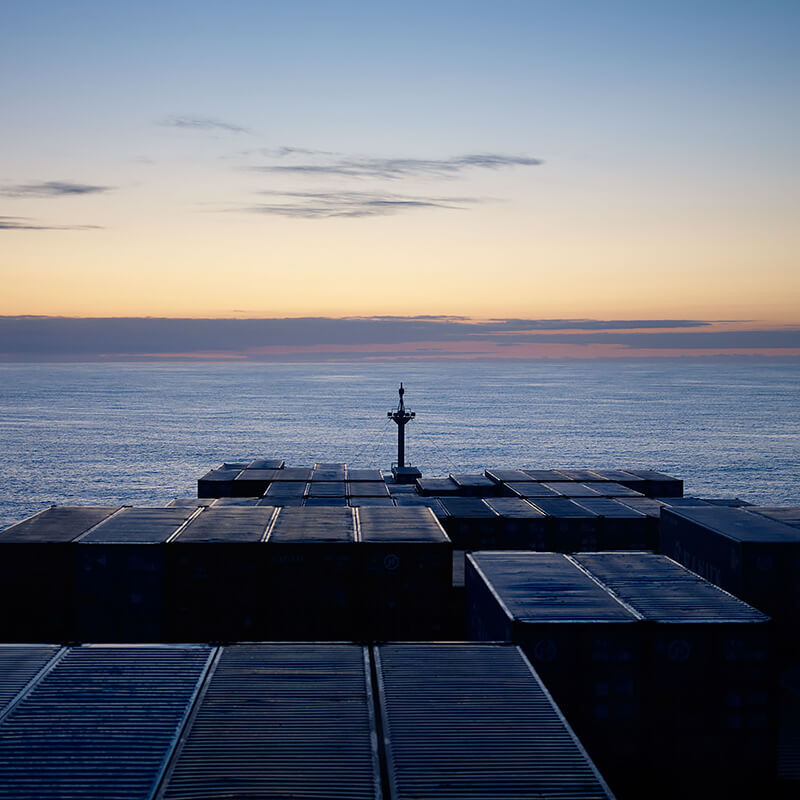 Catherine Opie/Aperture - From Here to There. 2009.

In 2009, I went on a 10-day journey from the Port of Busan, South Korea, to the Port of Long Beach, California, on a Hanjin container ship. The ship was perhaps the most abstract space I've ever occupied, a mass transportation of goods in the ethereal light of the sea. I kept track of time with my daily diligence of photographing sunrises and sunsets, waiting and watching from darkness to lightness, then lightness to darkness. This photograph is a sunrise that centers the ship sailing into the horizon. This ever-present horizon can be seen as a transitional space that we move toward and through, but mathematically, based on the ship’s height, is always 12 miles away until shore is reached. 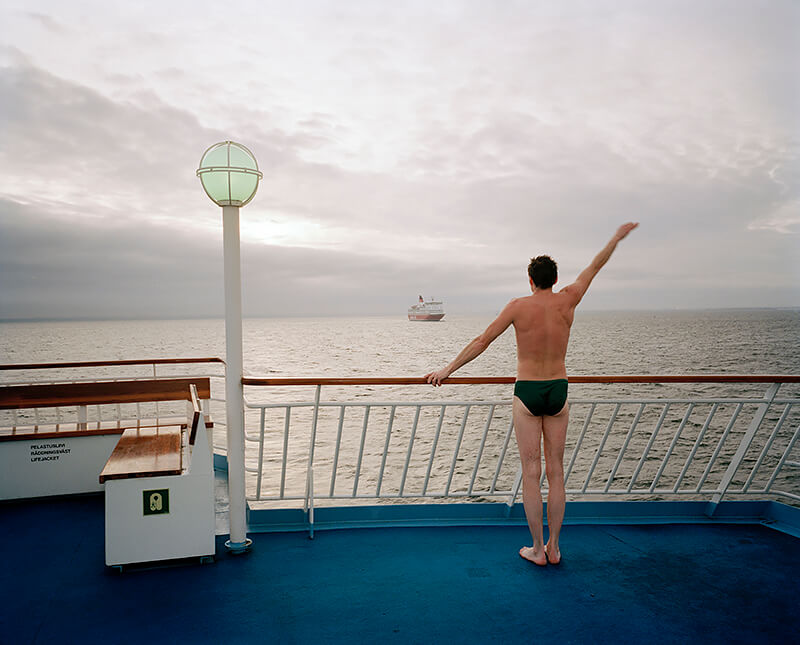 In the early 80s, I was teaching in Helsinki and would often go to Stockholm for the weekend on the ferry. This would involve buying cheap alcohol and consuming it en route. The Finnish love a sauna, and this guy is popping out to catch the cool.