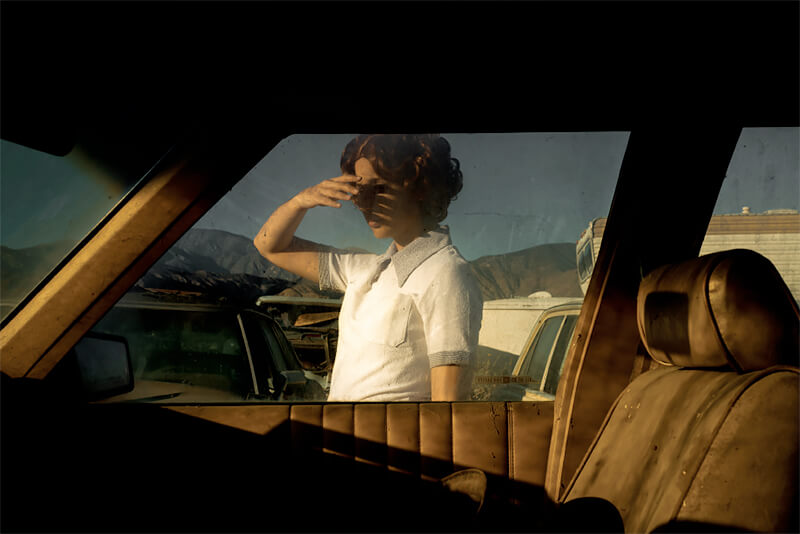 The color is red and the woman is ready. The color is blue and the phone is ringing. The American Dream is a fiction and so are these photographs by Tania Franco Klein.
"My main character is emotion" she says. But her subjects, the women Franco Klein builds into character studies, like figures in film stills, seem beyond emotion. They have seen too much. They see too much. They are ready for a change, to press beyond the sheath of solitude, to make the most of their time, which is all the time they have left. When they are not performing, they are not visible. And when they are not visible, the sun is setting.
In her recent photographs, Franco Klein appears to take up the mantle of the masters: the archetypes of Cindy Sherman's Untitled Film Stills and the Hollywood lighting of Philip-Lorca diCorcia's Hustlers, the shocking colors of William Eggleston and the mysterious, glossy poses of Jimmy DeSana.
Like a film-noir alchemist, Franco Klein combines the erotic and the enigmatic, setting her retro scenes of anxious road trips and glamorous hangovers against the psychological grain of the present: the stress of our digital age; the stress of performing. "I lost my sense of home," Franco Klein says of her life lived between Mexico City, California and London. That loss is expressed in these photographs as a search, by both artist and subject, woman alone and women as some imagined collective. Burned out, on the road again, or just waiting with a cigarette and the half-life of a dream, in the brilliant, gem-tone saturation of colored light, her women are lost in the world but found in images. We are all in this together, Franco-Klein seems to say to them, from behind the lens. Even if we are all alone.
- Brendan Embser, Managing Editor, Aperture Magazine
Share:

Hearts Road by Colin Finlay
Hearts Road was photographed in 95 countries and produced over a period of 30 years. It represents one man's journey of evolution, his deep spiritual...
Learn More